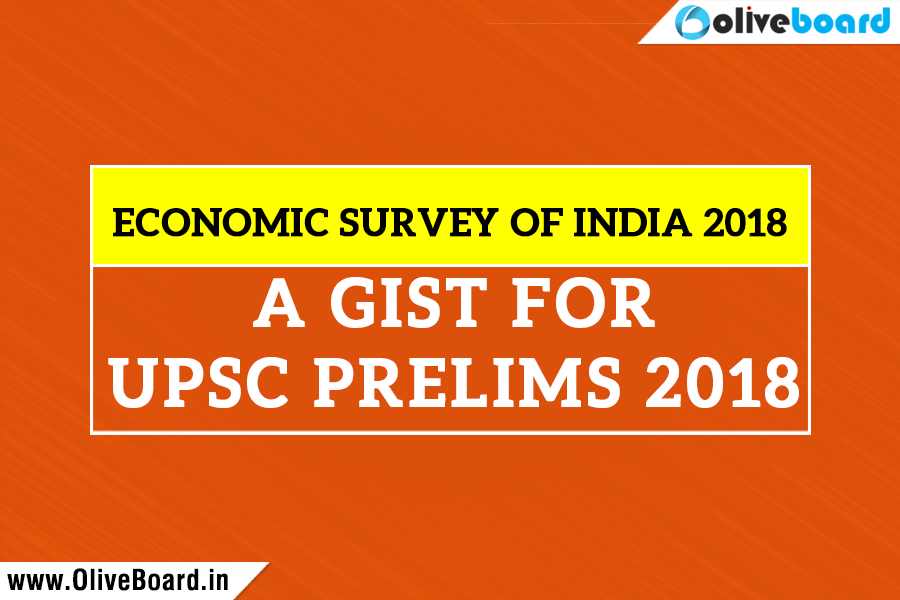 With 80 odd days left for Prelims 2018, Eco Survey is one thing any aspirant can’t afford to leave out. Here in this blog we present you with a general idea of Eco Survey volume 1 and its contents and how it should be studied.

Eco Survey every year is presented by the Chief Economic Advisor and this time too Arvind Subramaniam has done it.

Eco Survey is comprised of two volumes where Volume 1 and Volume 2. Volume 1 contains the analytical overview and more research-cum-analytical material. Volume 2 provides the more descriptive review of the current fiscal year, encompassing all the major sectors of the economy. A large part of Volume 1 focused on what are perhaps more long-term challenges.

The pink color of this year’s survey cover was chosen as a symbol of support for the growing movement to end violence against women, which spans continents.

Volume 1 has been divided into 9 chapters.

Chapter 1 State of the Economy: An Analytical Overview and Outlook for Policy

This chapter discusses recent happenings in the Indian economy and prioritizes events for short and medium term. It laid plans to achieve 8 percent growth and also discusses the deviation of Indian economy from the World Economy in performance.

After the implementation of both Demonetization and GST India lagged the world for the first half of the year due to additional reasons of consequences of Twin Balance Sheet Problem(TBS), rising real interest rates and fall in food prices resulting in lessening of Agricultural Income. In the second half, revival was seen, and two major events happened. India moved ahead in rankings of ease of doing business by 30 points and a rating Upgrade by Moody’s after 14 years.

In this period FDI inflow increased by 20 percent.

To tackle the problem of TBS government proposed two things

Macro Economy to be taken care of by addressing Current and Fiscal Deficits in the situations of rise in the oil prices.

To increase Tax-GDP ratio where there is a high economic growth. This is possible with GST.

Reviving Manufacture structure with twin aims of make in India and increase competitiveness of Indian manufacturing. Policy changes have been witnessed to result in improvement of exports and GST council has to take a comprehensive approach on policy to reduce export taxes.

Chapter 2. A New, Exciting Bird’s Eye View of the Indian Economy Through the GST

Chapter 4. Reconciling Fiscal Federalism and Accountability: Is there a Low Equilibrium Trap?

“The state’s role is to create the conditions for prosperity for all by providing essential services and protecting the less well-off via redistribution. The citizen’s part of the contract is to hold the state accountable when it fails to honor that contract.”

Chapter 5. Is there a “Late Convergence Stall” in Economic Development? Can India Escape it?

In 1960, India was a low-income country. In 2008 we attained lower middle-income status and if per-capita income grows at 6.5% per year, we would reach upper-middle income status by 2020.

The risk of a Late Convergence Stall needs to be taken seriously because of four headwinds:

There is no Late Converger Stall, as yet, but it would be wise to act to head it off.

Farm revenues declining for several crops despite increase in production and fall in market prices below the Minimum Support Price. Productivity has to be increased while price and income volatility has to be reduced.

Chapter 7. Gender and Son Meta-Preference: Is Development Itself an Antidote?

Over the last 10-15 years, India’s performance improved on 14 out of 17 indicators of women’s
agency, attitudes, and outcomes. On seven of them, the improvement has been such that India’s
situation is comparable to that of a cohort of countries after accounting for levels of development.

On several other indicators, notably employment, use of reversible contraception, and son
preference, India has some distance to traverse because development has not proved to be an antidote.

While there is considerable variation within the Indian states and across dimensions, the broad pattern is one of the North-Eastern states doing substantially better than the hinterland states even in development time; hinterland states are lagging, some associated with their level of development and some even beyond that; surprisingly, some southern states such as Andhra Pradesh and Tamil Nadu fare worse than expected given their level of development.

There is another phenomenon of son meta-preference which involves parents adopting fertility “stopping rules” – having children until the desired number of sons are born. This meta-preference leads naturally to the notional category of “unwanted” girls which is estimated at over 21 million.

In some sense, once born, the lives of women are improving but society still appears to want fewer of them to be born.

Most North-Eastern states (with the exception of Tripura and Arunachal Pradesh) and Goa are the best performer. Kerala comes next.

Most striking is the performance of Punjab and Haryana where the sex ratio (0-6 years) is approaching 1200 males per 1000 females, even though they are amongst the richest states.

While active sex selection via fetal abortions is widely prevalent, son preference can also manifest itself in a subtler form. Parents may choose to keep having children until they get the desired number of sons. This is called son “meta” preference. A son “meta” preference – even though it does not lead to sex-selective abortion – may nevertheless be detrimental to female children because it may lead to fewer resources devoted to them.

the sex ratio of the last child for first-borns is 1.82, heavily skewed in favor of boys compared with the ideal sex ratio of 1.05.

gender outcomes exhibit a convergence pattern, improving with wealth to a greater extent in India than in similar countries so that even where it is lagging it can expect to catch up over time.

The state and all stakeholders have an important role to play in increasing opportunities available for women in education and employment. Understanding the importance of its role, the government has launched the Beti Bachao Beti Padhao and Sukanya Samridhi Yojana schemes.

Innovations in science and technology are integral to the long-term growth and dynamism of any nation. The pursuit of science also creates a spirit of enquiry and discourse which are critical to modern, open, democratic societies.

A doubling of R&D spending is necessary and much of the increase should come from the private sector and universities.

To recapture the spirit of innovation that can propel it to a global science and
technology leader_from net consumer to net producer of knowledge__India should invest in
educating its youth in science and mathematics, reform the way R&D is conducted, engage
the private sector and the Indian diaspora, and take a more mission-driven approach in areas
such as dark matter, genomics, energy storage, agriculture, and mathematics and cyber physical
systems

Status of S&T in India:

The government’s efforts to make business and commerce easy have been widely acknowledged. Along with that next frontier to be gained on the ease of doing business is addressing pendency, delays and backlogs in the appellate and judicial arenas. These are hampering dispute resolution and contract enforcement, discouraging investment, stalling projects, hampering tax collections but also stressing tax payers, and escalating legal costs. This chapter recommends how to handle the issue of pendency of cases.

India jumped thirty places to break into the top 100 for the first time in the World Bank’s Ease of Doing Business Report (EODB), 2018. The rankings reflect the government’s reform measures on a wide range of indicators.

This striking progress notwithstanding, India continues to lag on the indicator on enforcing contracts, marginally improving its position from 172 to 164 in the latest report, behind Pakistan, Congo and Sudan.

Measures taken up by the Government to improve enforcement regime:

The average pendency of tax cases is particularly acute at nearly 6 years per case.

Steps needed to improve the situation:

Clear lines of demarcation and separation of powers between the two to preserve independence and legitimacy. Even while respecting these lines, it should be possible and desirable for these branches to come together to ensure speedier justice to help overall economic activity.

Which of the following statements ar true?

d. None of them is true.

When it comes to the statistics part of the eco survey it is suicidal to get the facts wrong because they take away your precious marks with penalty. But these are easy scoring marks if one gets to study them perfectly.

Hope you take these inputs and start preparing the Eco-Survey which covers the maximum part of the Economic and Social issues part for Prelims 2018.