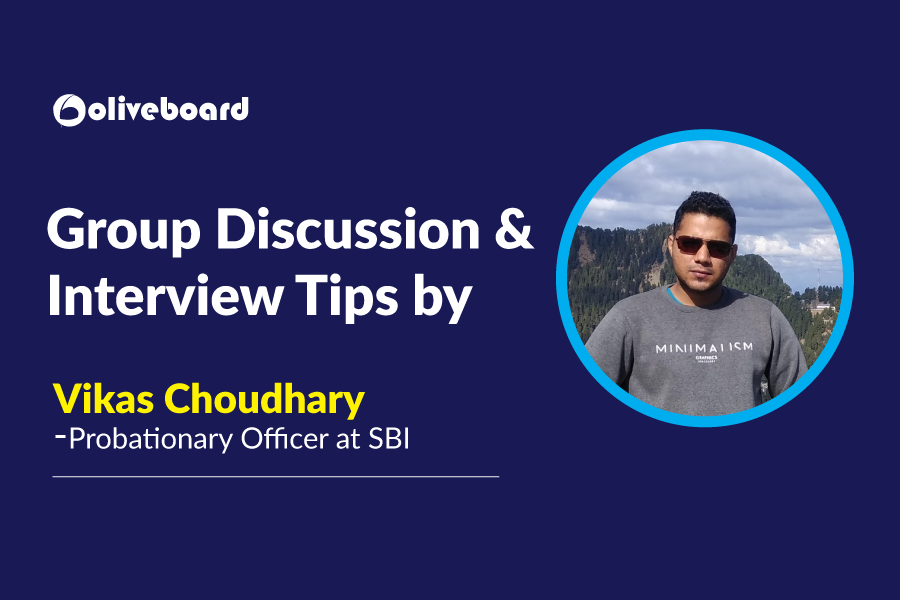 Vikas Choudhary, a Probationary Officer at State Bank of India shares his Group Discussion & Personal Interview Experience along with tips for aspirants. SBI PO GD and Interview is going on and this post would be helpful for the ones eligible for. This will also help all other aspirants attempting or planning to attempt any bank po exams. So here’s GD & Interview Tips in his own words,

When you start preparing for the GD and PI, there’s always a sense of uncertainty in the air and it’s highly unlikely to go away till you’ve got the results. You never know if it went good or bad. Sometimes you think it all went south and turns out you did well.

Now there are a couple of things to keep in mind:

GD: There are usually two rounds, a group discussion round followed by group task or either way around.

First, there’s going to be a bit of ice breaking session, making yourselves comfortable, introductions and all.

Sit straight and introduce yourself positively. Keep it brief, just state your name, place of origin and Alma Mater. After that, the coordinators will ask you to start the group discussion. Remember, only fools rush in. Everyone gets to have their say, so keep your nerves in check. They give you 2 minutes to write down your thoughts on the given topic. After that one by one everyone gets to speak their mind for once, during rest of the ordeal they remain spectators. They intervene if they feel like it. Say what you want to say in a straightforward manner. Avoid beating around the bush. Don’t cut in or interrupt other candidates. Choose your side, don’t play it completely safe, either it’s good or bad, but don’t be too harsh. They want to see your linguistic skills, the way you express yourself, whether you pay attention to what others have to say. You can always pick from, where someone has left the conversation. But do not blatantly support someone, they expect you to have your own say on the matter.

Although personally, I had critical views about and I still do but at that particular time, this topic had a different air around it. So, I decided to go with a slightly positive outlook. I mean yes, we can all assume that the coordinators are as unbiased as they come but let’s be blunt here, they’re also humans and they also have their own theories. I decided to keep it on slightly positive to a neutral tone. The coordinator asked us to put our views firmly, so I went for the positive ending. Guess he wasn’t fooling around. He asked all of us to take a side, from there discussion gained momentum. I mean there’s no end to discussions and nobody is expecting something good to come out of it. Important thing is that you put your views explicitly. Never get into an argument, even if someone is really grinding your gears. You don’t have to prove anything.

After that there’s was round two including a Group Exercise.

We were given around 14-15 points to arrange according to our personal preferences while buying a car. Now, this is where things took a nice turn. Everyone marked their preferences and after that, we had to come to a consensus. Amazingly after a discussion of mere 2-3 minutes, we had a consensus on 5-6 points. After that another candidate and I took the matter in our hands and we took it up to 9-10 points. The coordinators were smiling in amusement, they said it was amazing that we had consensus on 10 points. They also mentioned, no other group had a consensus on so many points.

Afterward, it was time for the interview, and what kills you the most is the wait. Everyone just wants to be done with it. The important part is to keep your calm during the waiting period. I was the last in my group, besides it was already past 3 PM. There had already been 2 groups before us, so I was expecting interviewers to not to be high on energy levels. I mean it goes both ways, they don’t grind you as much, but it also takes away your chance to stand out.

Anyway, I entered the room and greeted the panelists. A lady was there, so I greeted her separately.

Before I even had a chance to ask, I was asked to take a seat.

All four panelists had a copy of my biodata, they didn’t ask me anything about myself and this is where things started to take an interesting turn. I mean, you can prepare General Knowledge, Banking Awareness and work on questions related to HR, what else?

As soon as I sat down, a person seemingly the head of the panel, I mean you can sense it, fired the very first question.

P1: Tell me, have you ever travelled by air?

P1: There’s VT written on all Indian aeroplanes’ tails, followed by the flight number. What’s the meaning of it?

Me: Sir, is it something related to British Raj Licenses?

P1: (Pleasantly surprised) Yes. It is. See how bad is it? We’re still flying on their license.

(Apparently, it was in a newspaper article a day before the interview. I took a guess and landed safely.)

Me: (Smiling* by this time I had realized this is not going to be a run of the mill interview, time to buckle up.) Sir, same as everyone. I mean, it’s not like I had a choice, Sir.

By this time all four of them were smiling.

P1: What is the difference between Nagar Nigam and JDA (Jaipur Development Authority)?

Me: Bamboozled* I somehow convinced them with my answer.

P1: So, tell me, what did you learn during your college years that can be of some use to the bank?

Me: (I was prepared for this one.) Sir, I’ve studied, Economics, Sociology, Statistics, Computer Architecture, Data Analysis, Personality Development, and Conversational Skills.

P2: But you’re from Electrical engineering while looking at biodata. When did you study these?

Me: Sir, I had these as Open Electives.

P1: Explaining the concept of OEs to P2*

P2: Good, good. Tell me the basic difference about Mean, Mode and Median?

Me:(Boy oh boy I was prepared for this, I had read them word by word last night. I knew if I was going to mention Statistics, someone was going to go after the very definitions of them and you cannot afford messing the basics.)

I cited the definitions, word by word.

P2: So, tell me, if you had to cross a river, what would you use? Mean or Median? (He meant multiple times and to tell you the truth it was a half-cooked question, made up on the go.)

Me: Sir, it depends upon various factors.

Me: If there isn’t much difference in the width of the river across the length, we can use Mode.

P2: I think median would fare better in terms of accuracy.

Me: As I already mentioned Sir, it the variation isn’t much, Mode will do, otherwise it’s a median we’re looking for.

P2: Who invented the light bulb?

P3: What do you see when you see an advertisement of SBI in a newspaper?

Me: That it’s not just a bank but the face of the government’s banking policies.

P3: No, no, I meant what do you see, when you see that blue logo? I mean what’s the tagline of SBI?

Me: Banker to Every Indian, Ma’am.

And that’s when they decided to conclude my interview. I thanked everyone and headed out.

It was a very absurd one, but I decided if it has to go this way, I might as well come out of it smiling so that I did. In the end it all turned out fine.

I wasn’t asked a single career-related question or banking related or general knowledge related. I think they had already sensed it, so they decided to take me by surprise. I mean you can sweat all you like, but inside. Don’t let them see it. Expect anything and face everything with a smile. Later, I found out P1 was the head of the whole circle.

Hope this helps. All the best!

How I Cracked SBI PO Exam: Section-Wise Strategy by Topper