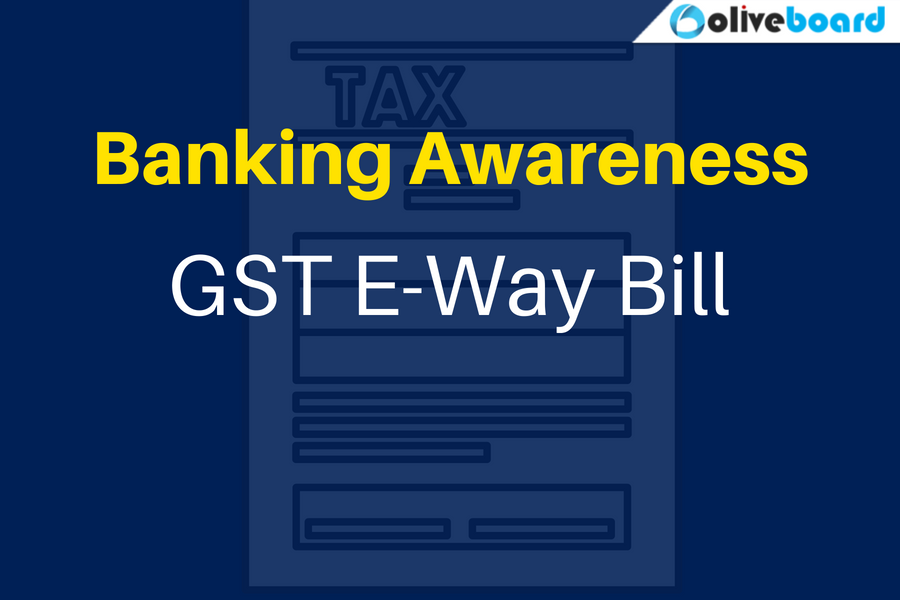 Economy and Banking Awareness plays crucial role in the General Awareness Section of Bank, SSC, and UPSC exam. You all must be preparing very hard for upcoming exams and have recently given few. In recently held RBI Grade B Exam, we have seen that most of the questions, in fact more than 20 questions were from Banking Awareness. Check RBI Grade B Exam Analysis. So, to further update you all about banking awareness, today in this blog we’ll talk about GST e-way Bill, as you may find questions related to it in upcoming IBPS RRB PO, IBPS RRB OA, Indian Bank PO, IBPS PO, IBPS Clerk, RBI Grade B, etc.

Before starting with GST e-way Bill, let us first understand what waybill, e-way Bill, and GST is.

A waybill is a receipt or a document issued by a carrier giving details and instructions relating to the shipment of a consignment of goods. The details include name of the consignor, consignee, the point of origin of the consignment, its destination, and route.

The Electronic Way Bill (E-Way Bill) is a compliance mechanism wherein the person causing the movement of goods uploads the relevant information before the commencement of movement of goods and generates e-way bill on the GST portal by way of a digital interface.

GST stands for Goods and Services Tax and is also known as Constitution (122 Amendment) Bill, 2014.

It is a single value-added tax levied at all points in the supply chain of goods and services. Credit is allowed for any tax paid on inputs. It would apply to both goods and services in a comprehensive manner. GST is best explained by this one line:

It is an electronic documentation giving details of the movement of goods and must be carried by transporters for any consignment exceeding Rs 50,000 in value (According to Rule 138 of the CGST Rules, 2017). It can be generated from the GSTN set up for the e-way bill system by the transporter before the movement of goods begins. It has two Components –

Part B- It comprises the details of the transporter (Vehicle number).

Why is it important to generate the GST e-way Bill?

Who can generate GST e-way Bill?

The consignor or consignee, as a registered person or a transporter of the goods can generate the e-way bill.

What is the validity of GST e-way Bill?

In general, e-way bill’s validity cannot be extended. However, the Commissioner may extend the validity period only by issuing notification for certain categories of goods.

If the GST e-way Bill has been generated under this rule, but the goods are either not transported or are not transported as per the details furnished in the e-way bill, the e-way bill may be cancelled electronically on the common portal, either directly or through a Facilitation Centre notified by the Commissioner, within 24 hours of generation of the e-way bill.

However, an e-way bill cannot be cancelled if it has been verified in transit as per the provisions of rule 138B of the CGST Rules, 2017.

What are the consequences of non-conformance to GST e-way Bill rules?

If e-way bills are not issued according to the provisions contained in Rule 138 of the CGST Rules, 2017, it will be considered as contravention of rules. As per Section 122 of the CGST Act, 2017, a taxable person who transports any taxable goods without the cover of specified documents (e-way bill is one of the specified documents) shall be liable to a penalty of Rs. 10,000/- or tax sought to be evaded (wherever applicable) whichever is greater.

GST e-way Bill, thus, ensure that relevant information is uploaded before the movement of a consignment, both intra-state as well as inter-state. In future, the government may use the e-way bill as an effective mechanism for reconciling the movement of goods with GST returns, which would further help in safeguarding its revenues. Also, the GST e-way Bill would effectively dissolve all non-tariff barriers, such as check posts and entry tax, so that movement of goods across states is free of all hindrances, thereby reducing transit time and enhancing supply chain efficiencies.

That is all from us in this blog. Hope you find the information useful.

Attempt the Oliveboard Free All-India Mock Test that’s been taken by thousands of aspirants already to see where you stand.

Download the Oliveboard Mobile App for free study material and other latest updates.