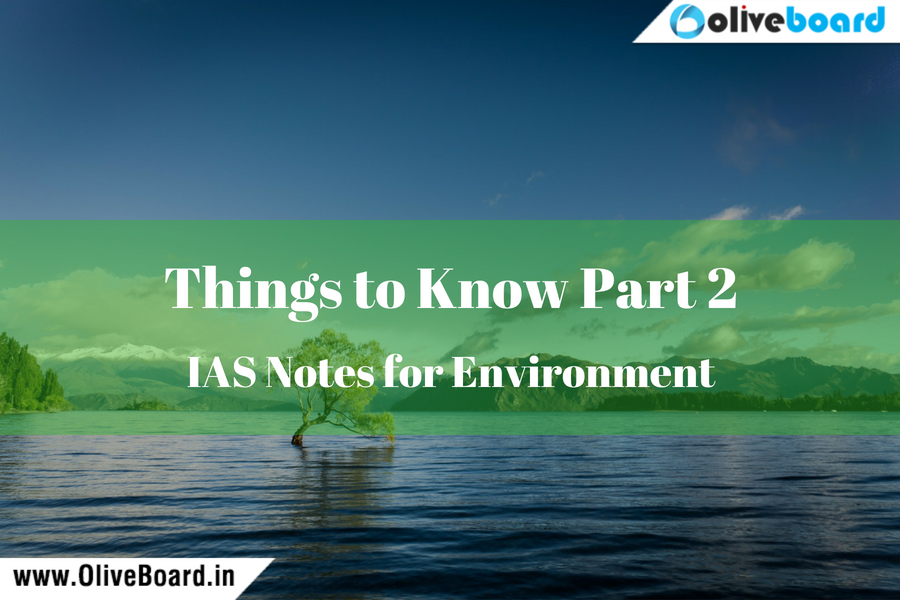 The following blog is the second in our series called “Things to Know” for UPSC preparation. In this blog we have continued from where we left in the first part – IAS notes 2019 – Environment. All the topics mentioned below are extremely important and must be part of your IAS notes 2019 for Environment.

A Dobson unit is the most basic measure used in ozone research. One Dobson Unit (DU) is defined to be 0.01 mm thickness at STP (standard temperature and pressure). Ozone layer thickness is expressed in terms of Dobson units, which measure what its physical thickness would be if compressed in the Earth’s atmosphere. Over the Earth’s surface, the ozone layer’s average thickness is about 300 Dobson Units or a layer that is 3 millimetres thick.

Greenpeace activist Jim Puckett coined the term toxic colonialism in 1992. It refers to the export of toxic waste from the West to third world countries. Despite some economic gains to developing nations, the adverse effects of toxic colonialism on the people and environment of these nations outweigh any positives. (Source – Wikipedia)

The Bamako Convention is a treaty of African nations prohibiting the import of any hazardous (including radioactive) waste. The Convention was negotiated by twelve nations of the Organisation of African Unity at Bamako, Mali in January 1991, and came into force in 1998. The impetus for the Bamako Convention arose from the failure of the Basel Convention to prohibit trade of hazardous waste to less developed countries (LDCs), and from the realization that many developed nations were exporting toxic wastes to Africa. (source – wikipedia)

4. Barbados Programme of Action for the Sustainable Development of SIDS (BPOA)

The Holocene extinction otherwise referred to as the Sixth extinction or Anthropocene extinction, is the ongoing extinction event of species during the present Holocene epoch, mainly because of human activity. The large number of extinctions spans numerous families of plants and animals, including mammals, birds, amphibians, reptiles and arthropods. With the widespread degradation of highly biodiverse habitats such as coral reefs and rainforest, as well as other areas, the vast majority of these extinctions is thought to be undocumented. The current rate of extinction of species is estimated at 100 to 1,000 times higher than natural background rates. (source – Wikipedia)

This brings us to the end of the blog – IAS Notes 2019 – Environment: Things to Know Part 2. We hope the information provided in this blog would be a valuable addition to your IAS notes 2019 for UPSC preparation.