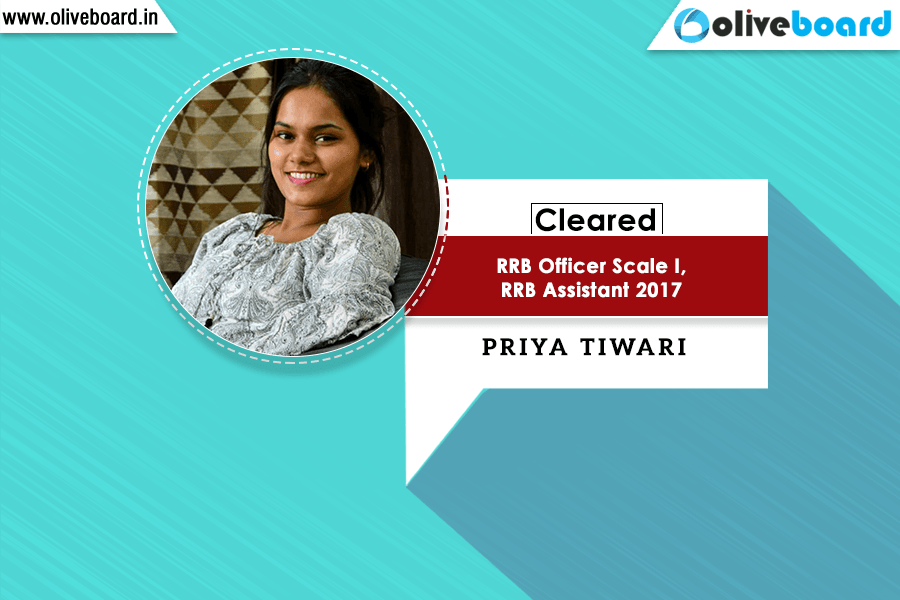 ‘Stop doubting yourself, work hard and make it happen’, says Priya. Read the Success Story of Priya Tiwari below:

“Hi Guys, I am Priya Tiwari from Madhya Pradesh. I have cleared RRB Officer Scale I and RRB Assistant 2017 and is currently working at Narmada Jhabua Gramin Bank, as a Scale I officer.

Strategy which I followed:

Quants: I started my quants preparation by attempting problems from affairs cloud. Later, I switched to Oliveboard in look out of some good test series which can help me push my limits. The decision turned out fantastic and I started getting better day by day in Quants. Just to tell you guys, I didn’t cover the complete syllabus. I left a few of the chapters in quants and worked onto those chapters where I was good. This decision of mine saved my time during the practice at home as well as it saved my time in the examination hall, as I directly used to leave questions based upon those left chapters at a glance.

Reasoning: I practised entire reasoning from Oliveboard and few other online resources. I was good at solving puzzles and syllogism and hence used to solve puzzles in the last few minutes after completing one-liner questions. Anyone, who wants to clear any of the banking examinations this year I would say solve enough problems on seating arrangements as problems on seating arrangements are frequent.

I chose Hindi as the language to attempt RRB Officer scale I and RRB assistant. For the preparation of Hindi, I only relied on Oliveboard Test series nothing else.

General Awareness: For current affairs, I used to refer to different YouTube channels and monthly capsules by affairs cloud. I made my own hand-written notes and used to revised them periodically. For static GK, I made use of various eBooks, which are available freely on the internet.

Tips for Aspirants: For all those who are appearing for any of the banking examination this year I would say take any of the test series that are available in the market and start taking mock tests on a day-to-day basis. However, I would recommend Oliveboard for the serious aspirants, who want to clear the exam this year. Work on your accuracy. Do not fall for the number of attempts, as it makes no sense. Do not simply follow someone else’s strategy, devise your own by considering your weaknesses.