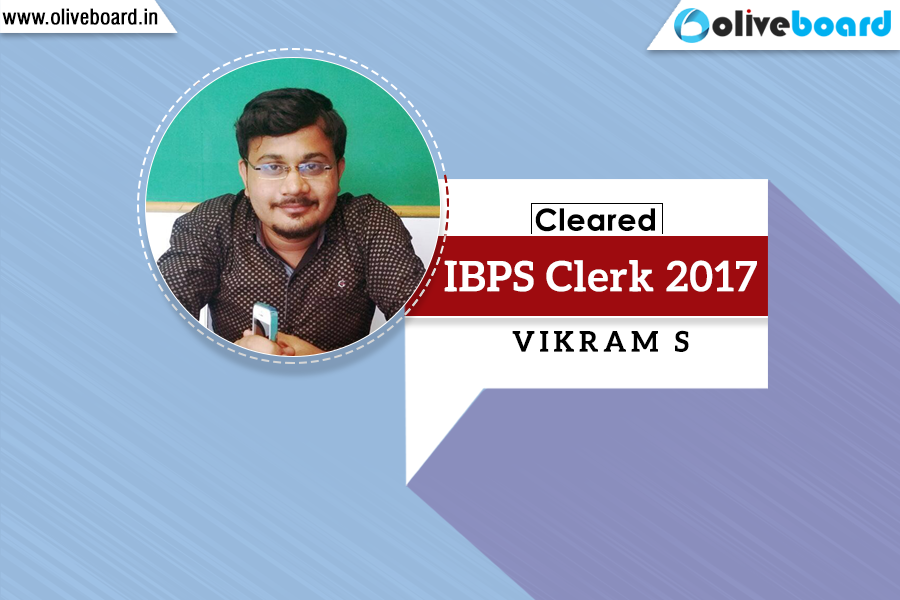 In his own words,

“Hello friends, I’m Vikram S from Tamil Nadu. I have done my graduation in engineering from Panimalar Engineering College, Chennai. After completing my graduation in 2014, I started preparing for UPSC Civil Service Examination. Unfortunately, I could not clear after giving two attempts. I then decided to take break from UPSC and switched to banking sector exams. Honestly, I did not know anything about the bank exams. I did not know where to begin from, and how to prepare.

I came across an exam site named as Oliveboard, which played a vital role in making me a successful candidate. I took Mock Tests from the basic level to higher level in Oliveboard. Finally, success knocks on the door! I cleared IBPS Clerk 2017 from Tamil Nadu state and was appointed in Indian Bank.

For my exam preparations, I mostly followed RS agarwal and Arun Sharma for aptitude. For reasoning, I practiced a lot from the Oliveboard Test Series. Preparing for General awareness required me to follow four months of current affairs.

I Would suggest all my fellow aspirants to be strong in basic concepts and then start preparing from the standard exam sites. I feel that the standard preparation site is Oliveboard as their Mock Tests are same as the actual IBPS Exam.

I can frankly say that without Oliveboard, my success would not have been possible. I am thankful to the entire team of Oliveboard.

All the best to all the aspirants.