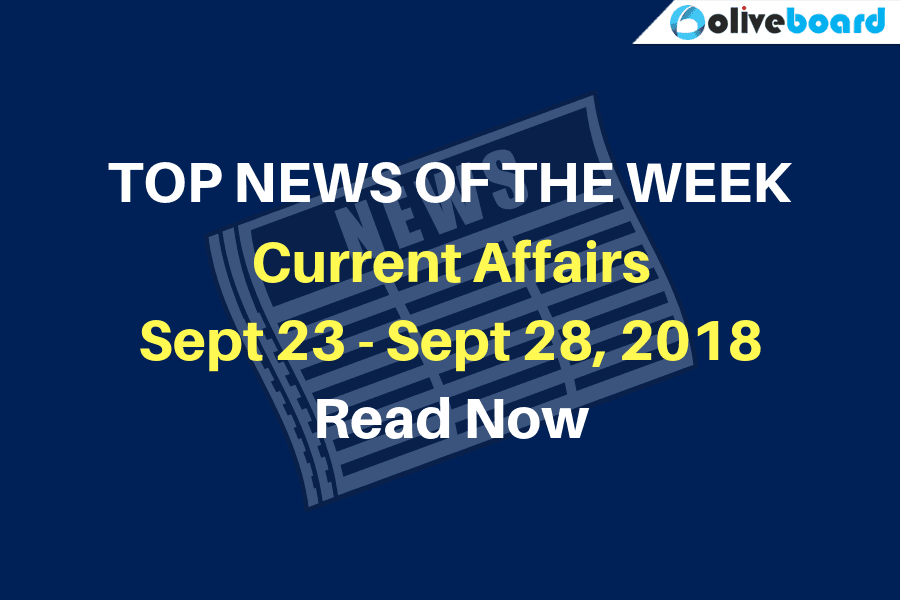 In this blog, All the Top news of week Top News of the week – Current Affairs from Sept 23 to Sept 28 2018 for your General Awareness and Current Affairs preparation for Bank and Government exams

3) International Day of Sign Languages was celebrated by Indian Sign Language Research and Training Centre (ISLRTC) under Ministry of Social Justice and Empowerment. The theme of the day is “With Sign Language, Everyone is Included!”

5) Croatian footballer Luka Modric was named the world’s best male player at the Best FIFA Football Awards in London. Modric won his third Champions League title in a row in May and guided Croatia to their first World Cup final in July.

6) India ranked 158th in the world for its investments in education and healthcare, according to the first-ever scientific study ranking countries for their levels of human capital. The study conducted by the Institute for Health Metrics and Evaluation (IHME)

8) Prime Minister Narendra Modi has been awarded the prestigious United Nations Champions of the Earth Award. PM Modi and French President Emmanuel Macron have been awarded under the Policy Leadership category for initiating International Solar Alliance(ISA).

9) Supreme Court declared Centre’s Aadhaar scheme Constitutionally valid. However, it struck down some of its provisions including its linking with bank accounts, mobile, and school. SC also struck down Section 57 permitting private entities to avail Aadhaar

10) The government appointed Rajni Kant Mishra as the Director-General of Border Security Force (BSF). BSF is the primary border guarding organization of India established in 1965. It currently stands as the world’s largest border guarding force.