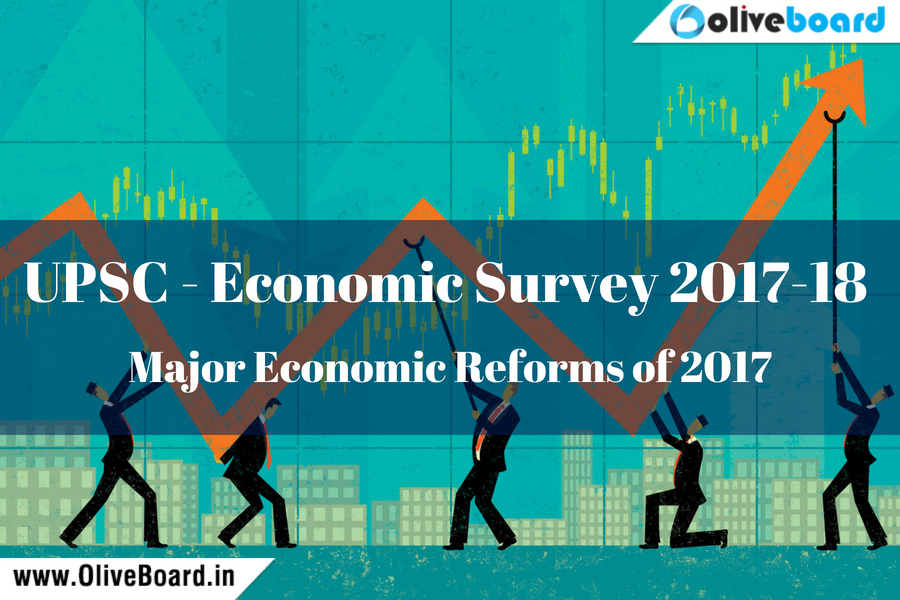 Indian Economy is an integral part of the UPSC syllabus. One cannot even dream of achieving success in UPSC exam by neglecting Economics. When it comes to Indian Economy, one of the primary sources of study is the yearly Economic Survey published by the Government. In the past, direct questions about the facts or information mentioned in the economic survey have been asked by UPSC. This is the reason why Economic survey is such an important aspect of the UPSC preparation. The Economic Survey 2017-18 is a must-read document for UPSC preparation.

1) GST (Goods and Service Tax): The GST Council was created as India’s most effective institutional mechanisms for cooperative federalism.

Cooperative Federalism: Also known as ‘Marble cake federalism’, is a concept of federalism in which national, state and local governments interact cooperatively and collectively to solve common problems, rather than making policies separately. It is not a substitute for state’s own efforts at furthering economic and social development, but a complement needed to tackle difficult structural reforms that involve states.

Cooperative federalism technology of the GST council could be used to:

(2) Government Policy: Rationalize government resources by –  Redirecting them away from subsidies, towards the public provision of essential private goods and services at low prices. For improving lives of poor and marginalized in a meaningful way:

It is estimated that a $10 per barrel increase leads to:

Overcoming fiscal vulnerabilities require: High tax to GDP ratio; which has remained the same since the 1980s. Despite average GDP growth of 6.5% being the most rapid in Indian history.

Real effective exchange rate (REER): appreciated around 2% since 2014 due to struggle with the “International Trilemma”. (REER – is the weighted average of a country’s currency relative to an index or basket of other major currencies, adjusted for the effects of inflation. The weights are determined by comparing the relative trade balance of a country’s currency against each country within the index)

International trilemma is the struggle to choose between the following three and maintaining the balance of all three:

Sectors of Indian Economy : All You Need to Know