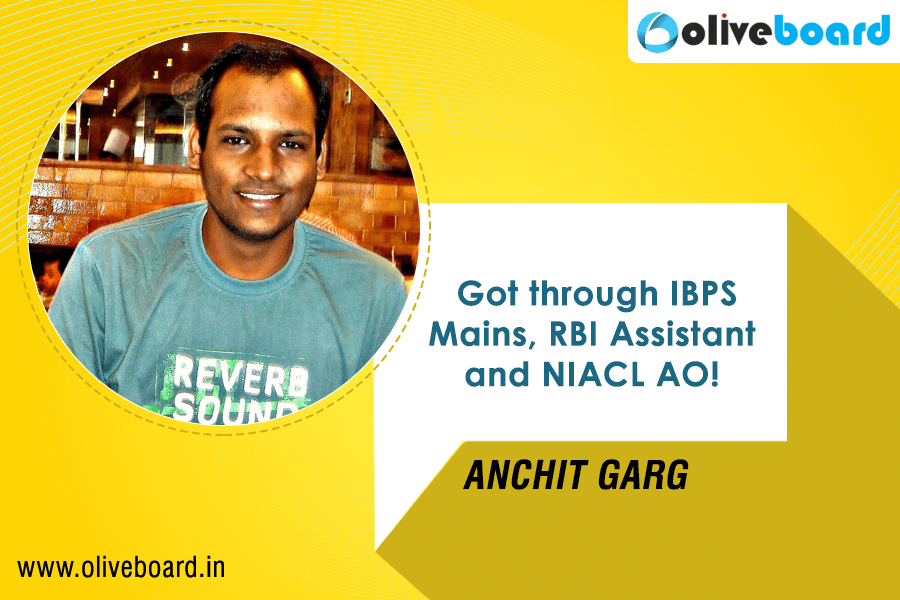 My name is Anchit Garg, aged 26 years, who has traveled across length and breadth of India because of frequent transfers. I have done B.E Civil Engineering from Bangalore in 2013, worked in Jaipur for 33 months as Civil Engineer in 3 different companies at different designations. In between, I completed PG Diploma Quantity Surveying from Pune via Distance Education mode. The work culture, lethargic and unhealthy conditions at workplace forced me to turn towards public sector jobs. One of my relatives who is in a PSB suggested me to enter into BFSI sector. From July 2016 onward, I started preparing for banking exams. Initially, I cleared  SO exam of Allahabad Bank in July but did not make it into the merit, learnt a lot of things from the interview. Then, I cleared Bank of Baroda PO Exam in Sep but again merit out (missed by two marks).

Posted by Oliveboard on Thursday, April 6, 2017

Those days my aim was IBPS PO, so I used to solve mocks of Oliveboard because of the range of difficulty level of the tests.

Since I have studied in English medium schools and colleges, English was not difficult, but I had to work on RC and Para jumbling of sentences. For GA, I used to read newspapers, monthly capsules, books and notes for banking awareness. Maths was not that easy because I could solve most of the questions but time was the barrier in maths. So I learned shortcut tricks and practiced to improve Maths. The reasoning was the strongest and accuracy in this section was approximately 95%, so I only practiced it regularly. All the sections were improved by practicing Oliveboard mocks only. The pattern of the questions, user-friendly test environment, detailed exam analysis and solutions of the questions are the best features of Oliveboard. I used to score only 33-35 marks in IBPS Prelims mocks of Oliveboard but in Oct, I attempted 76 questions in the actual IBPS Prelims and I scored 72 which boosted my morale.

The level of questions asked in IBPS Mains was totally different but it was similar to that of the mocks of Oliveboard so I did not lose confidence after IBPS Mains. After this all the exams I gave I cleared all and finally, I got selected as PO in Bank of Maharashtra in Feb. In late Feb, I was also into the merit of RBI Assistant and in the first week of March, I made it into the merit of NIACL AO too. Though all the exam questions are similar, only the difficulty level was different in different exams. Now I am very confident that my name will be featured in upcoming results also. Right now I have decided to join as Assistant in RBI.

I would suggest all the future aspirants treat each and every exam as if it is your last option, only then you will give your 200%. Keep giving mock exams as this is the only way to improve your speed as speed and accuracy are all that matters in these exams.

All the Best for your future!

LIC AAO vs SBI PO – Which is a better Post?