How can a SBI Clerk become a PO

Staffs of Banks are basically divided into Clerical Cadre and Officer Cadre. Candidates are directly recruited as Clerks and Officers, after their respective exams and interviews. However, after working for a certain period of time, a clerk may want to shift to the officer cadre. A clerk cannot be internally recruited as a Probationary Officer, since POs are directly recruited. However, clerks can shift to the officer cadre as TOs (Trainee Officers) or JMGS – 1 (Junior Management Grade Officer Scale -1).

This shift is possible through 3 means, which are explained below:

(ii) OJM Internal Exam: This is another internal exam (written test & interview) for employees to make a shift to the officer’s cadre. However, to be eligible for the OJM, a clerk should have minimum 6 years of service as a clerk under the fast track promotion channel or 12 years of service under normal promotion channel. The perks are equivalent to that of a PO but the salary is relatively lesser.

(iii) Direct recruitment as PO: If you want to become a PO, you can appear in the exam conducted by the State Bank of India and get directly recruited as a Probationary Officer through the regular selection process.

The below table gives a brief idea about channel of promotion and minimum experience requirement at various levels of Officers:

Following is the career graph of an ideal SBI Clerk working his way to the top: 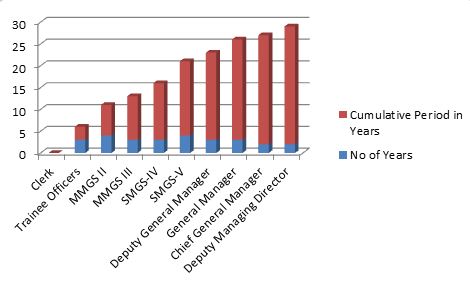 The above is subject to many rules and regulations including age limits, number of chances of promotion, further educational qualification and so on. All these can be found in the circulars released by banks from time to time.

We hope you find the above informative helpful in making the right career choice. SBI PO is the next major exam. Click here to take mock tests for SBI PO Mains in new pattern.