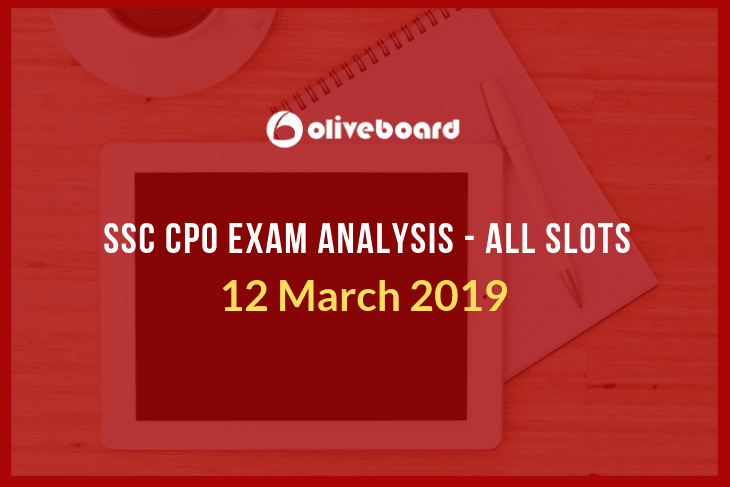 Staff Selection Commission (SSC) is conducting the SSC CPO Tier I exam today. The SSC CPO exam was scheduled to be held from 12th to 16th March 2019. The first shift of today’s exam is over and we are here with the detailed exam analysis. The SSC CPO Exam Analysis will help candidates in knowing the pattern followed this year i.e. what kind of questions were asked, their difficulty level, etc. The notification for SSC CPO 2018 exam was released last year for the recruitment of SI in CAPFs, ASI in CISF and SI in Delhi Police.

All the four sections, i.e., English Language, Quantitative Aptitude, General Intelligence and General Awareness, were of easy to moderate level. Let’s look at it in detail:

Data Interpretation: two types of DI was asked- linear and Pie-chart, in which there was two Linear DI, and 1 Pie Chart.

In the General Intelligence or the Reasoning section, questions were, again, of Easy to Moderate level. Some questions were time consuming but doable.

This section included questions from History, Geography, Polity, Economy, with majority of questions from General Science, like Physics, Chemistry, and Biology. Few questions from recent events, like Sports, Awards and Honours, Agreements and MoUs. etc. were asked. Let’s have a look at them:

Note: Those who have exam in coming days, don;t forget to take the SSC CPO Free Mock Test. this will help you immensely in checking your preparation level.

This brings us to the end of the blog. Hope you find the SSC CPO Exam Analysis provided here useful. If you have any queries, write in the comment section below.