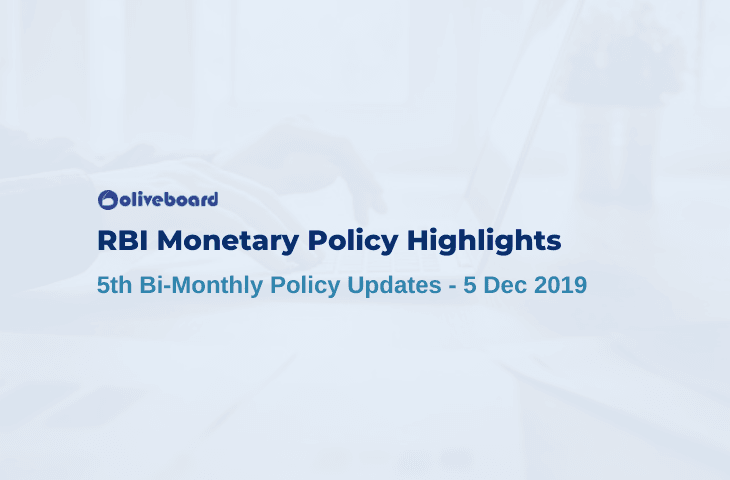 Reserve Bank of India, India’s Central Bank, has announced its 5th Bimonthly Policy Update 2019. The six-member Monetary Policy Committee (MPC) headed by Governor Shaktikanta Das have unanimously voted for a status quo policy, maintaining the monetary policy stance as accommodative. The committee has kept the Policy Repo Rate unchanged at 5.15%. Thus the Reverse Repo Rate unchanged at 4.90% and the marginal standing facility rate and Bank Rate at 5.40%. These decisions are in consonance with the objective of achieving the medium-term target for consumer price index (CPI) inflation of 4 per cent within a band of +/- 2 per cent while supporting growth. Now, let us look at the other details of RBI’s 5th Bimonthly Monetary Policy Update 2019.

Let us have a look at the current monetary policy rates 2019 below:

The MPC also decided to continue with an accommodative stance as long as it is necessary to revive growth while ensuring that inflation remains within the target.

RBI said although inflation is rising in the near-term, it is likely to moderate below target by the second half of FY 2020-21. The RBI has increased the CPI inflation projection to 5.1-4.7% for the second half of the current fiscal year and 4.0-3.8% for the first half of the next fiscal year 2020-21. RBI said that these decisions are in consonance with the objective of achieving the medium-term target for consumer price index (CPI) inflation of 4% within a band of +/- 2% while supporting growth

Turning to the growth outlook, real GDP growth for 2019-20 has been revised downwards from 6.1% in the 4th Bimonthly policy (October) to 5.0%. Shortly after announcing a sharp reduction in projected GDP growth from 6.1% to 5% for 2019-20, the Reserve Bank today said that it is expecting a steep rise in food inflation with moderation expected only in the second quarter of next fiscal. RBI Governor Shaktikanta Das said the government and the RBI are committed to the national objective of reviving growth.

The MPC noted that the forthcoming union budget will provide better insight into further measures to be undertaken by the Government and their impact on growth. The RBI Governor, however, expressed satisfaction over the reasonably swift monetary transmission by banks.

6. About the impact of Digital Currency

Talking about the issue of digital currency, Mr Das said not just RBI, but central banks across the world are strictly against the issuance of private digital currency. Stating that issuing currency is the central bank’s sovereign function, Mr Das said no private entity can overwrite such functions. He, however, said that RBI will definitely consider issuing digital currency once the technology is available with adequate safeguards. He clarified that discussions in this regard are at a very incipient stage.

7. On the issue of PMC (Punjab & Maharashtra Co-operative Bank)

On the PMC Bank, the RBI Governor said the report of bank’s forensic audit and a professional valuation of the bank’s assets will be available by the end of this month, following which a decision of monetization of these assets will be taken. He added that a coordination mechanism between the administrator and the Economic Offences Wing of Mumbai Police, the Enforcement Directorate and the RBI is in place to monitor the bank’s day-to-day working.

8. On the Non-Bank Finance Company

Talking about Non-Banking Financial Company – NBFC sector, Governor said RBI would not allow any large and systemic NBFC to collapse. He said that RBI has a fairly good idea as to which NBFCs are vulnerable and is ensuring adequate liquidity for all.
Emphasizing that as a regulator and the prime in charge for maintaining financial stability, the Reserve Bank is best placed to assess the correct state of any NBFC, Mr Das defended the RBI’s action to refer the DHFL case to National Company Law Tribunal.

The minutes of the MPC’s meeting will be published by December 19, 2019. The next meeting of the MPC is scheduled during February 4-6, 2020.

This was all from us in this blog of “5th Bimonthly Monetary Policy Update 2019”. We hope that you like the information provided here about RBI monetary policy 2019. For more such content keep visiting Oliveboard.