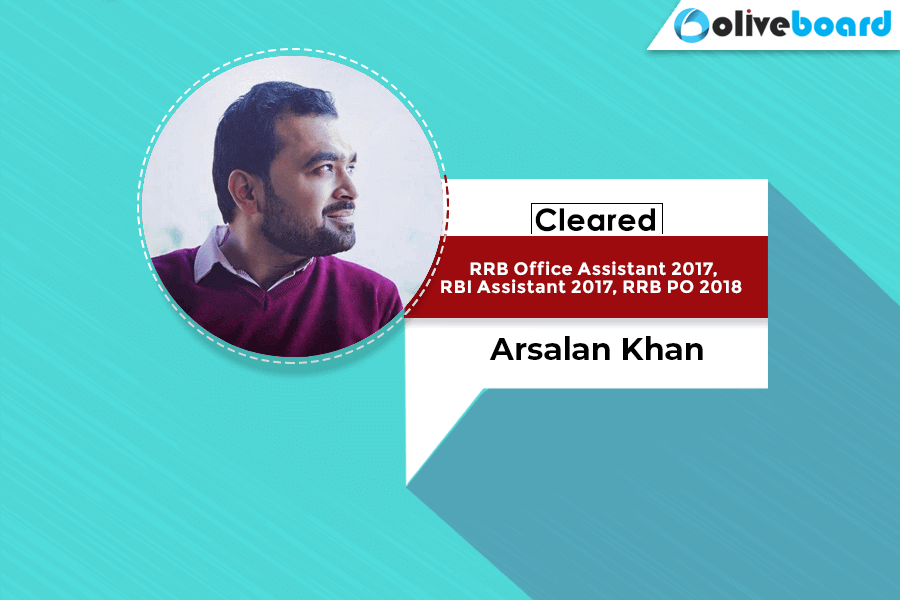 Here is his inspiring story:

Hello everyone, I am Arsalan Khan from Tilhar, Shahjahanpur (UP). I did my Intermediate from Commerce stream in 2011. I started my graduation in commerce and along with that I was preparing for CA course. After completing my graduation, I kept preparing for CA course till 2016, but I realized that this course needs sheer hard work plus a lot of patience. And being from a farming background family and seeing my father doing hard work in fields, it was a self pressure on me to start earning as 2 years have passed since my graduation.

So in 2016, I decided to start preparing for banking examinations. I joined a coaching institute in Bareilly, after completing the course there, I learnt that coaching are just for clearing our basics but self study with Regular Mock tests would help one better in clearing the exams.

Initially I was clearing all prelims Examinations but couldn’t clear a single mains till December 2017. For that I realized that I was following a wrong practice of waiting for Prelims result before starting preparation for Mains. Also reasoning and GA were the 2 sections I was scoring badly.

I was lacking in puzzles section, and mains examinations these days are purely based on puzzles. So I started solving puzzles from various Online sources and it helped me a lot and I would suggest the same to fellow aspirants.

I personally don’t have a strategy for this section. Even I used to skip English Section in my mocks too, but I would not suggest the same to anyone. This section these days is purely comprehensive based so one should make a habit of reading English books and novels. Also practice some sectional mocks to gain command over this section. But I used to attempt topics like cloze test, double fillers, error finding , sentence rearrangement first and then attempt reading comprehension and other comprehensive topics. I would say that one should follow his/her own strategy in this section.

This is a section which decide your selection these days. A very important one for the aspirants.

After scoring just 7 marks in RRB PO mains 2016 and 11 marks in SBI PO MAINS 2017, I realized that waiting for Prelims result before starting GA is not a smart idea. So From August 2017, I started making daily notes of Current Affairs from 2 different sources. I used to revise them on weekly/bi weekly basis.

For Banking Awareness, I watched the videos of Oliveboard and other YouTube channels. For static part, I used to read Capsules and other PDFs, and this helped me a lot in my later examinations as I scored 27 marks in the next exam .

This has been my favorite subject since school days. Also as I had a habit of doing mind calculation from those days , it helped me a lot in my Prelims Examinations. But as Mains exams are more concept based these days, I was not scoring well in Mains. Also I was facing difficulty in arithmetic topics like Time and work, boats & streams, distance speed, etc so I started preparing for miscellaneous topics from various Online Sources and a book named Quicker Maths by M Tyra.

This helped me in understanding the concept. Also in exams , we are getting Data Interpretation (DI) based on arithmetic topics only so one should have a proper knowledge of the concept and this can only be achieved by a lot of practice.

For Mock-   I preferred Oliveboard mocks for my IBPS PO MAINS and SBI PO MAINS Exams as they provide a similar difficulty level as compared to real exams.

In the end I would like to say that never lose hope. During mid 2017 , after SBI PO failure, I was feeling very demotivated but I set a deadline for me that on or before 1st Jan 2018, I have to get a job and keeping that thing in mind and with some hard work combined with Some luck, I got my first selection in RRB Office Assistant 2017.

Alternatively, you can also download the Oliveboard Mobile App for more success story and free study material and other latest updates.