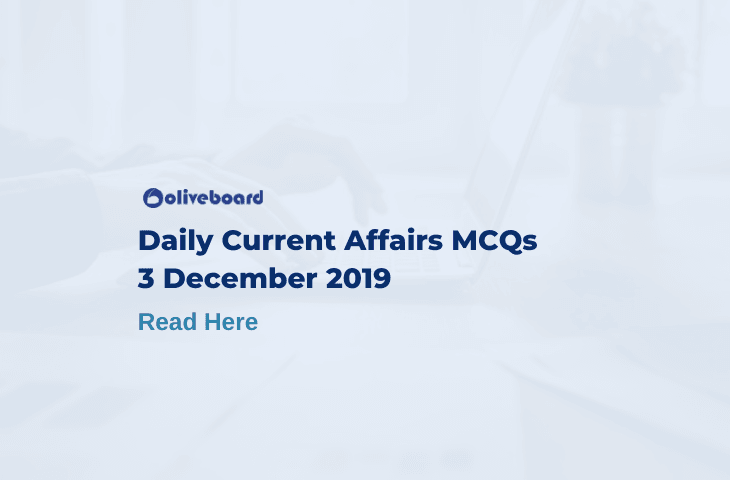 Welcome to another day of Daily Current Affairs MCQ 3 December 2019. In this blog, we have discussed the questions and their answers based on daily current affairs and static gk. This blog will keep you updated with the latest happenings around the world. If you are preparing for exams like RBI Grade B, IBPS PO, IBPS Clerk, SSC CPO, LIC Assistant read this daily blog and join Oliveboard for more advanced exam practice, live video sessions, and live practice sessions.

Q1) Recently, Lewis Hamilton has won the 2019 Abu Dhabi Grand Prix by defeating whom among the following?

Q2) Lok Sabha passed a bill to replace an Ordinance for effecting the reduction of corporate tax rates. Base corporate tax for existing companies has reduced to ___________.

Q3) Masatsugu Asakawa has been elected as the president of the Asian Development Bank. He is the ___________ President of ADB.

Q4) IFC has invested ___________ in Mahindra and Mahindra Financial Services to create a dedicated pool of financing for MSMEs in low-income states.

Q5) Lionel Messi has won the 2019 Ballon d’Or award in Men’s category. Who got the third place on the list?

Q6) The Global Migration Film Festival was recently organized in which place?

Q7) What is the projected GDP growth rate of India for the Financial Year 2018-19 by CRISIL?

Q8) Ursula von der Leyen has taken charge as the President of which among the following international organizations?

Q9) As per the statement from FM, nearly ________________ percentage of depositors of Punjab and Maharashtra Co-operative Bank has been allowed to withdraw their entire deposits.

Q11) Recently, Walmart has launched a co-branded credit card in partnership with which bank?

Q14) ‘Yamoussoukro’ is the capital of which among the following countries?

Q15) Sitanadi Wildlife Sanctuary is situated in which among the following states?

Q16) The act of putting a lapsed policy back into force, after the grace period has expired is known as _________.