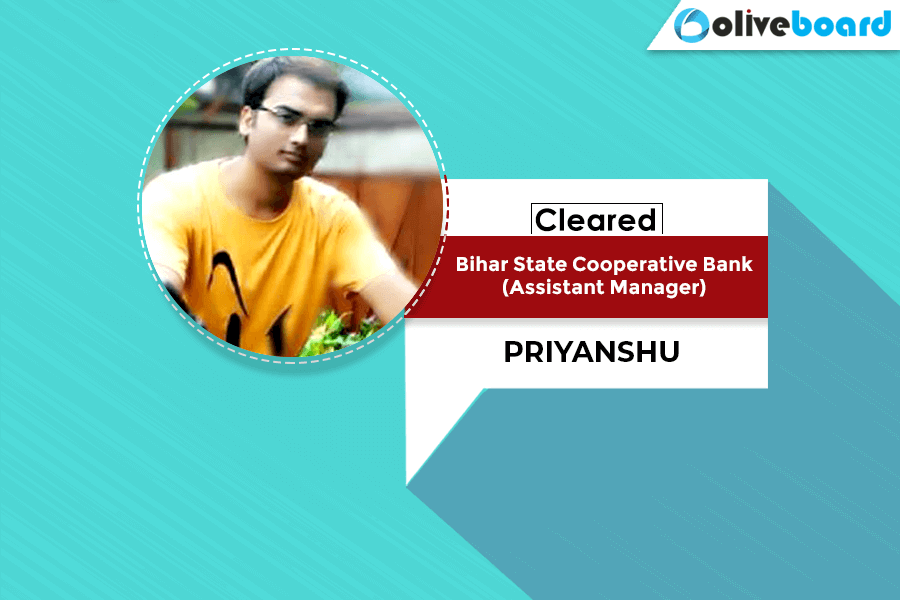 Read the success story of Priyanshu, who believes that if you have self confidence & determination to achieve something, then things will eventually turn your way. Thus with such strong determination & hard work, Priyanshu went on to clear Bihar State Cooperative Bank exam after facing many failures in his life.

Here is his  story:

Hi Guys, I am Priyanshu from Bihar. I am an engineer by profession. I have completed my B.tech in 2015 from  NIT Arunachal Pradesh. After college, I started preparing for Banking exams. I always dreamt of becoming a banker. Initially, I appeared for many exams but could not clear them. But I never lost hope and kept working hard to achieve my goals.

I would like to tell all the aspirants to work hard and stay focused and one day you will surely achieve your goals. I believe that practice makes a man perfect. For banking examinations, I devised a proper strategy where I used to attempt speed test in alternative days and then analysed my performance in order to improve the weak areas.

I referred various online materials which helped me a lot in improving and brushing up my skills. List of Exams attempted by me:

– IBPS PO,2017 – Not qualified in the merit list (gave interview but didn’t qualify)

– IBPS RRB CLERK – Got 2.75 marks less than the cutoff in the Mains

– IBPS SO IT–  Prelims not Qualified

– IBPS RRB PO – Gave interview but did not qualify

– IBPS SO IT – Prelims Qualified but Out in Mains

I would like to thanks to everyone has been a  part of my journey and contributed significantly in my success-Oliveboard, Success Stories,, Parents and Well-wishers. The journey was not easy and it became possible due to their support & cooperation.

Alternatively, you can also download the Oliveboard Mobile App for more success story and free study material and other latest updates.