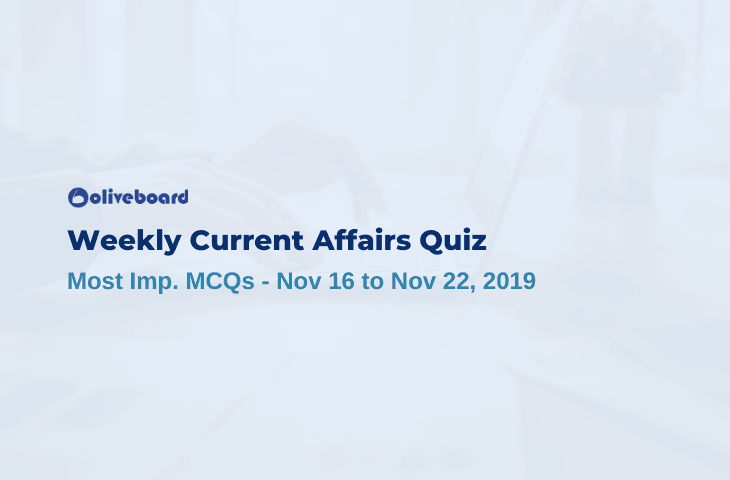 ‘General Awareness’ is one of the scoring sections asked in competitive exams because the questions are direct and factual. Majority of questions in this section are based on Current Affairs, making it crucial to update it on a regular basis. To help you do that Oliveboard provides daily, weekly as well as monthly current affairs updates to keep your prep on track. But we know that practising is as important as preparing it, hence, we have come up with Weekly Current Affairs Quiz Series where you get to brush up the weekly news by practising a few questions around it. Here’s the Weekly Current Affairs Quiz – Nov 16 – Nov 22 for the past week:

1. Who inaugurated two-day International Conference on Yoga at Mysuru, Karnataka?

2. Who is elected as the new President of Sri Lanka?

3. Who is sworn in as new Prime Minister of Sri Lanka?

4. What is the name of first Indian woman to be posted abroad as defence attaché?

5. Who is the first woman officer posted as Assistant Naval Attaché in abroad?

6. Who is honoured with the Indira Gandhi Peace Prize for 2019?

a) Reporters without Borders

e) Centre for Science and Environment

8. Which city is the fastest-growing prime residential market in India, as per Knight Frank’s global index report?

9. Which state announced to ban the sale of junk food in schools and in the 50m area around them?

10. Which Indian State has launched toll-free number 14500, to curb sand smuggling in the state?

11. What is the position of India among 200 countries as per trace bribery risk matrix 2019?

12. Which is the most risky country as per trace bribery risk matrix 2019?

13. As per Driving Cities Index by European car parts retailer Mister Auto, Which city is the worst city to drive in the world?

14. As per Driving Cities Index by European car parts retailer Mister Auto, Which city is the best city to drive in the world?

15. What is the economic growth forecast of India for 2019-20 by Moody’s Investors Service?

17. Union Cabinet of India approves MoU between India and Finland for strengthening cooperation in the field of

d) All of the above

20. Who is named as People for the Ethical Treatment of Animals (PETA) India’s 2019 Person of the Year?

21. What is the name of first Hindi Newspaper in Arunachal Pradesh?

25. The Reserve Bank of India issued resolution of non-banking financial companies having assets worth of at least how much amount, will come under the insolvency resolution law?

26. As per Insolvency and Bankruptcy Code (Amendment) ACT, 2019 the resolution process must be completed within _____days.

28. Davis Cup is related to which game?

29. Which of the following company is not included in the disinvestment plan, approved by the government of India in November 2019.

That’s all from us in the Weekly Current Affairs Quiz – Nov 16 – Nov 22. Watch the GA Genius Video by Aditya Sir provided below to know about these current events in detail.