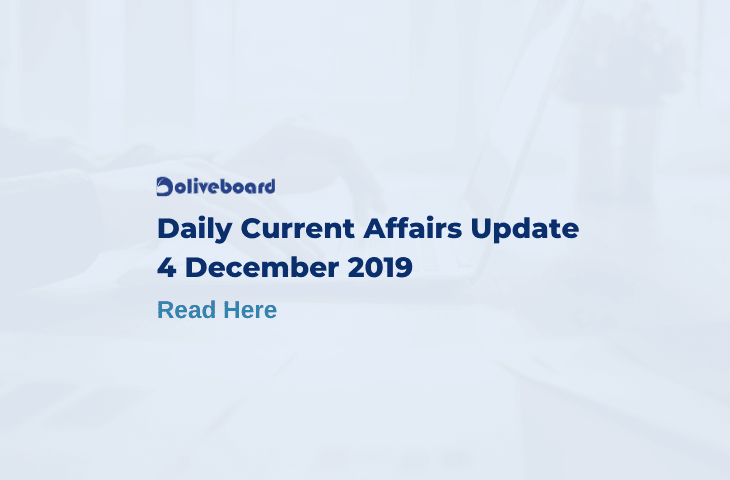 And we are back again with Daily Current Affairs Update – 4 Dec 2019. Read the blog to know the latest current affairs update and major news headlines that are important for various government exams. This blog is intended for every aspirant who is rigorously preparing for any government/ banking exam. Also, If you are preparing for various exams like  RBI Grade B, IBPS PO, IBPS Clerk, SSC CPO, LIC Assistant, etc. Join Oliveboard and get the courses designed with the latest patterns and high-end mock tests to check your preparation level.

Parliament on Tuesday passed an amendment to the Special Protection Group Act 1998, that will allow SPG cover to the PM and Former PM for a period of 5 years after leaving office.

At least 16 parties have signed a motion demanding a debate on “electoral reforms for free and fair elections”. The parties are expected to ask to return to the old form of voting that is a paper ballot.

The center has written to all the State voicing concern that due to lower Goods & Services Tax (GST) collections, the compensation cess might not be enough to pay for losses arising out of the tax system.

The Citizenship bill is likely to be tabled next week amongst the parliament. Defense Minister Rajnath Singh has asked the MPs to refrain absenteeism.

Donald Trump abused the power of his office

As per House Intel Committee’s impeachment inquiry report, Donald Trump abused his office power. A key congressional committee from the Democratic controlled House of Representatives has alleged in a report. Trump misused his office powers into pressuring Ukraine to announce an investigation into his political rival former Vice-President Joe Biden.

Indian-origin U.S. Senator Kamala Harris of California announced the end of her 2020 presidential campaign after failing to garner support in key states despite an early rise n the polls, according to a campaign source.

Russian President Vladimir Putin has signed a bill into law that gives the government the right to register bloggers, journalists and social media agents as foreign agents. The Bill extends an existing law involving foreign-funded media outlets, adopted in 2017

Manchester City bounced back after suffering a disappointing draw against Newcastle. It defeated Burnley 4-1 in the premier league.

India dominated the track and field events of the 13th South Asian Games (SAG) by clinching 10 medals, including 3 golds, on the first day of athletics competition here.

Heena Tokas opened with a wild flurry of punches and continued that streak for a major part of her lightweight bout against Pavitra of Railways in the fourth Elite National Women’s boxing championship.

That is all from us in this blog, Daily Current Affairs Update – 4 Dec 2019. We have tried to cover the significant headlines for the day and the current affairs. For more such content please keep following Oliveboard.