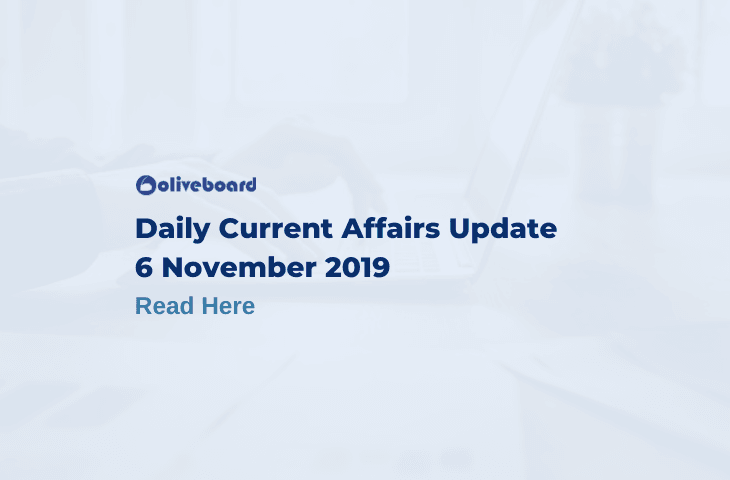 And we are back with Daily Current Affairs Update – 6 Nov 2019, with an aim to cover the major incidents for the day. Current affairs do form an important part of the daily schedule especially for the aspirants who are preparing for any kind of bank, government, insurance exam. If you are preparing for various exams like  RBI Grade B, IBPS PO, IBPS Clerk, SSC CPO, LIC Assistant, etc. Join Oliveboard and get the courses designed with the latest patterns and high-end mock tests to check your preparation level. Let’s start with the blog.

RSS and Muslim Leaders meet in regard of Ayodhya Case

Amidst the Ayodhya verdict anticipation, the leaders of RSS and Muslim community met and decided to honor the ruling of court peacefully without leading to a law and order issue.

Could join RCEP, if demands are met

After giving the initial confirmation that India will not be joining RCEP for now, Piyush Goyal on Tuesday said that India could think about joining RCEP if its demands are met.

Supreme Court has asked CBI to submit a fresh report

In a probe to investigate Former Prime Minister Rajiv Gandhi’s assassination, the Supreme court has asked CBI to prepare a fresh status report with all the evidence and then the court proceedings will move further.

UK’s Prime Minister Boris Johnson will formally be announcing to conduct an election with an agenda to ‘get Brexit done within a few weeks’. He will urge voters to support him to get through the elections.

The US began formal pullout from Paris Deal

Ths US has notified the United Nations that it will be pulling out from the Paris Agreement of 2015 which binds the agreement for countries to cut emissions and reverse global warming.

Afghan President and Chinese Foreign Minister to have talks with Taliban

Afghan President Ashraf Ghani and Chinese Foreign Minister Wang Yi to have a talk with Taliban representatives in next month.

A UK court is set to hear the bail plea for the fugitive diamond merchant Nirav Modi today.

2nd T20 International match between India and Bangladesh to be played on Thursday in Rajkot.

Haryana’s Rachna marked her shift from the single-lapper to the 800m in style, setting a new record by clocking 2:06.12

PV Sindhu marked an early exit from the China Open after losing from Pai Yu Po of Chinese Taipei.

Satwilsairaj Rankireddy was the highlight with the wins in both the category of men’s singles and mixed doubles.

That is all from us in this blog Daily Current Affairs Update – 6 Nov 2019, we have tried to cover the major headlines for the day and its essence to help you get a good read. For more such updates, please stay tuned to Oliveboard.