Daily GK Questions: Attempt All Of Them Now 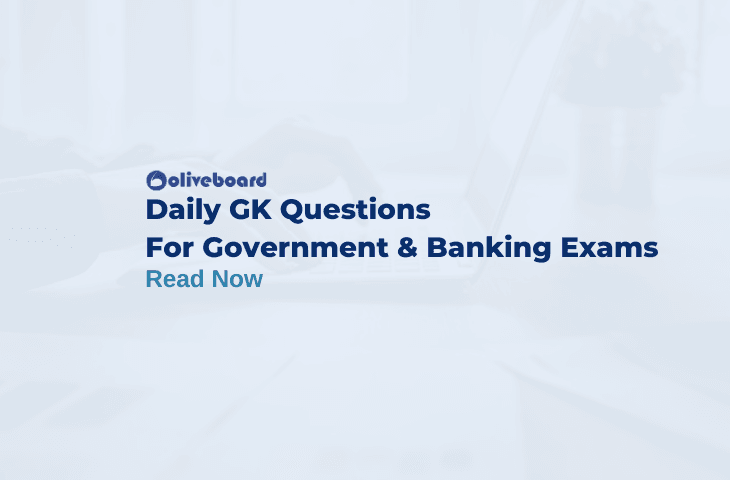 In view of the number of aspirants preparing for the exams daily, Oliveboard is bringing you the Daily GK Question which is the combination the daily news and static news which will eventually help aspirants in staying up to date with the daily events and the events held in past. General awareness is considered to be the most scoring section as the questions are easy and based directly on facts. Catch up all the latest current affairs here in this daily blog. Prepare for exams like RBI Grade B, IBPS PO, IBPS Clerk, SSC CPO, LIC Assistant, etc. For more advanced exam practice, live video sessions, and live practice sessions, join Oliveboard Edge.

Q2) Where was the 6th Parliamentary Speakers’ Summit of G20 Countries held at?

Q3) Which of the following newly launched IT initiative of the central government will help the public to know the daily Customs clearance times of import cargo at various ports and airports?

Q4) 15-day National Tribal festival-Aadi Mahotsav is set to begin in New Delhi in the month of November. Who is the union minister of Tribal affairs?

Q5) Cooperation Afloat Readiness and Training (CARAT) is a joint navy exercise between the US and?

Q6) The biennial Commonwealth Law Ministers’ Conference began in Colombo. Who is the current Commonwealth Secretary-General?

Q7) When was the historic Berlin Wall fall event took place in Germany?

Q8) Rafel Nadal secured top spot for the eighth time in his career according to the latest ATP rankings. Rafel Nadal is from which country?

Q9) Who break the record of Virat Kohli to become the youngest known captain to lead a side in Deodhar Trophy finals?

Q10) How much is the penalty imposed by the supreme court for burning garbage & waste in Delhi, Punjab, Haryana, western UP states?

Q12) Where is the selected location for the International Boarding School Fair to be held on 2019 November 6?

Q13) India’s Lakshya Sen has won the SaarLorLux Open badminton tournament held at Saarbrucken in Germany. Whom he defeated in the finals?

Q14) A computer virus is a malicious program that self-replicates by copying itself to another program. Melissa is an example of?

Do check our different courses and start preparing for the exams with the best mock test series on Oliveboard.