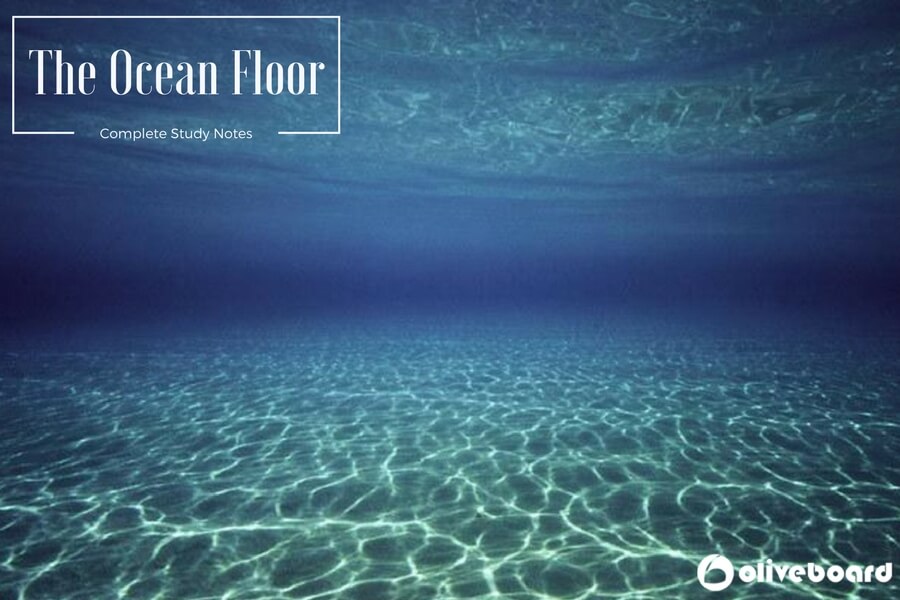 Ocean Floors are an important part of exams like SSC CGL and UPSC CSE Preliminary exam syllabus. The following article contains detailed information on the most important aspects of the Ocean Floor which you can use for your exam preparation.

Earth has an abundance of water and around 70% of our planet is covered by it. Hence, the names “Blue planet” or “Water planet”.

The Ocean floor/Seabed/Sea floor is the bottom of the ocean. Like on dryland, ocean also contains landforms like Mountains, Plateaus, Ridges, Basins, Canyons and Trenches. The ocean floor exhibits a variety of features and is rugged with the largest plains, highest mountain ranges and deepest trenches, which are formed by volcanic, tectonic and depositional processes.

Most oceans have almost similar structure, created by physical activities in the form of sediment carried from various sources or from movement of the tectonic plates.

Let us now briefly learn about the ocean basins:

The shelves are covered in massive sediment deposits brought down by glaciers, rivers and wind, distributed by the ocean currents and waves. These deposits, received over an extended period of time, sometimes become source of fossil fuel.

The Continental Slope begins at the border of the Continental Shelf, where it sharply drops off (shelf break) into a steep slope. The depth of the continental shelf varies somewhere between 200 and 3000 meters. The total length of world’s combined continental slope is approximately 200,000 miles. 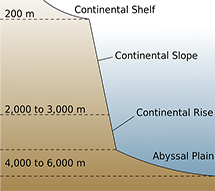 The Abyssal plains (topographic plains) are flat areas on the seafloor, adjacent to a continent, at a depth of 3,000 to 6,000 meters. They slope gently and vary in depth only from about 10 to 100 centimeters per kilometer. Abyssal plains elongate along continental margins and are hundreds and thousands of kilometers long. These areas are the smoothest and flattest surfaces on Earth, covered with sediments such as silt and clay. These plains are more common in Atlantic Ocean and rare in the Pacific Ocean.

The sea floor is flat where the sedimentation (caused by land erosion, brought by rivers, microorganism activities, underwater volcanoes, etc.) is heavy and it covers the tectonic features and contains cracks and vents spread across thousands of kilometers where sedimentation is light (Atlantic Ocean).

Oceanic trenches, some of the deepest spots on earth, are long, narrow, relatively steep-sided depressions in the deep sea, occurring at depths of approximately 7,300 to more than 11,000 meters. They occur in the deepest layers of the ocean, popularly known as the Hadalpelagic zone. Oceanic trenches are typically formed due to tectonic activities, where one tectonic plate moves under another, in a process called subduction. 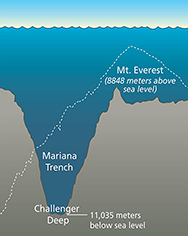 The extreme cold temperatures and lack of sunlight, make ocean trenches part of the most unique habitats on Earth.

The ocean deeps are divided into various zones. The Hadal zone is the deepest oceanic zone and lies between 6,000 to 11,000 meters. There’s an abundance of marine life in the deep sea, especially around white and black smokers (hydrothermal vents that emit toxic chemicals). The deep sea marine life receives its energy from chemosynthesis by bacteria and from the temperature difference.

Besides the above four divisions, there are other major and minor yet significant features predominating the ocean floors, like Guyots, Seamounts, Ocean Ridges, Canyons, Hills, etc. Let us briefly learn about them:

Mid-oceanic Ridges are some of the largest features in the ocean basins. They’re a series of continuous submarine mountain chains. Mid-ocean ridges are formed by plate tectonics and are hence known as divergent plate boundary. They are made of two long chains of mountains separated by a large valley or depression. Some mountain ranges can reach above the ocean’s surface (Iceland).

The oceanic ridge system is one of the most prominent features on Earth’s surface. Like the continental shelf, slope, abyssal plain and trenches, ridges are found in every ocean basin. Ridges can be found rising from a depth of about 5 kilometers to a uniform depth of about 2.5 kilometers and can be hundreds of miles wide.

Seamounts are large underwater mountains that are formed by volcanic activities. Seamounts come in a variety of sizes and shapes and have pointed summits. They rise from the seafloor and can be approximately 3,000 to 4,500 meters tall and can be found near boundaries of tectonic plates. The highest mountain on Earth, Hawaii’s Mauna Kea, is a seamount and is more than 30,000 feet tall (taller than Mount Everest).

There are hundreds of thousands of seamounts around the globe. Seamounts are also biologically rich and support a wide variety of marine life. The steep curvature/slope of these mountains enable nutrients to be carried upwards from the depths of oceans toward the surface, thus providing food to marine life living there.

Seamounts are covered in marine sediment and most of the material dug up from seamounts are glassy basalt formed due to the flow of lava. 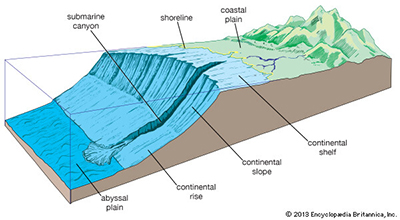 Guyots can best be described as isolated seamounts that have flat tops/summits. Guyots can be found more than 600 feet below the sea level. Their flat tops can have diameters greater than 10 kilometers. It is said that the Pacific Ocean alone has more than 10,000 seamounts and guyots. 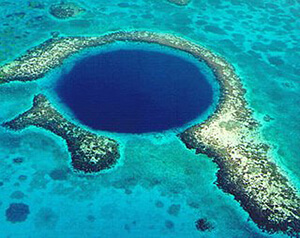 Atolls are low islands surrounding a deep central depression. They’re ring-shaped islets that consist of coral reefs and surround a body of water called Lagoon, that are approximately 160 feet deep. Atolls are generally developed with seamounts and protect an island, together with lagoons.

As the volcanoes continue erupting and growing higher, they eventually break the surface of water to form oceanic islands. Following this, little sea animals called corals (Hermatypic corals/Hard corals) begin to build a reef around the oceanic island by created a hard exoskeleton of limestone.