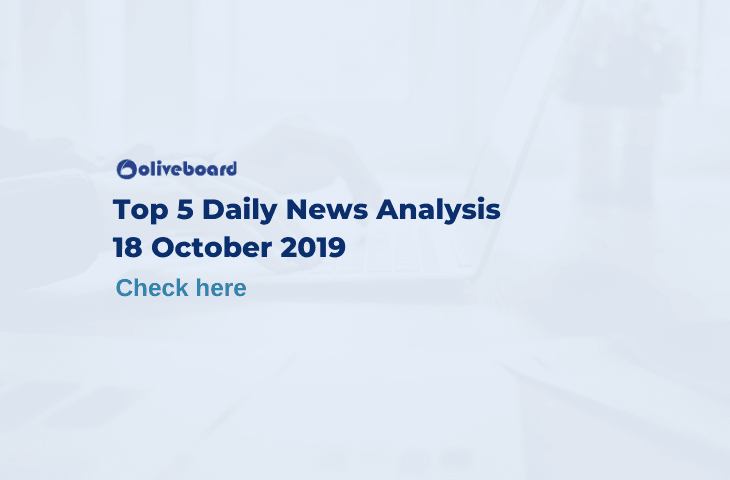 Top 5 Daily News- 18 Oct 2019 is an attempt to confine major news of the day at a single place. Aspirants preparing for various competitive exams have current affairs as a part of the exam which demands them of staying upto date with the latest current affairs. This Daily Blog will help you in acquiring major updates at a single place with an in-depth analysis of the news.  Prepare for exams like RBI Grade B, IBPS PO, IBPS Clerk, SSC CPO, LIC Assistant, etc. For more advanced exam practice, live video sessions, and live practice sessions, join Oliveboard Edge.

Kerala Startup Mission is an attempt to boost the culture of startup in Kerala state.

The theme of the event is ‘Accelerating ideas to industry 4.0’. The event was held in Kodakara district of Kerala.

The World Steel Association is one of the largest Industry representation in the world and represents 85 percent of the World’s steel production.

Unicorns refer to World’s billion-dollar tech ‘start-ups’ founded in the 2000’s and not yet listed on Stock Exchange.

Beijing is the world’s startup capital with 82 Unicorns.

India has ranked at 82nd position out of the 128 countries. USA stood at the top followed by Myanmar and New Zealand.

At the bottom of the list are Yemen, Greece, and China. Few other countries and their ranks are as follows:

India and Oman comes together for Joint Exercise

The exercise to scheduled to take place from 17-26th October at Air Force Base in Masirah, Oman.

For the first time, a Mig-29 aircraft will be participating in an International Exercise outside India.

That is all from us today’s blog for Top 5 Daily News- 18 Oct 2019. For more such information and exam related content please keep following Oliveboard.