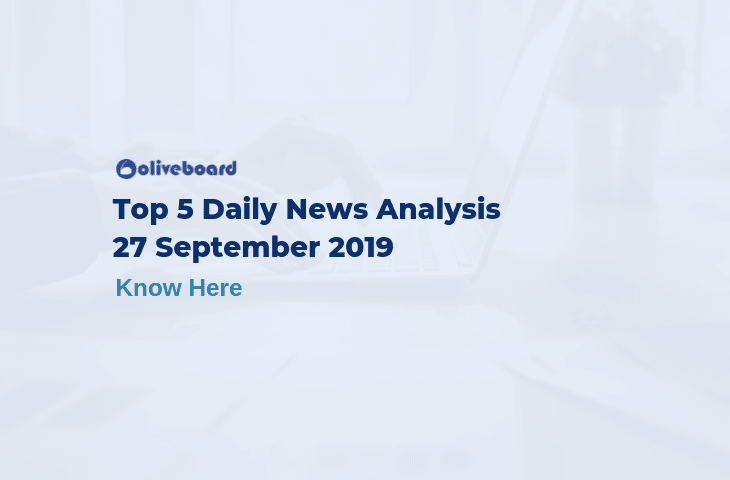 Here we are again with the Top 5 daily news- 27 Sep 2019. This blog will cover top news for the day that made it to the headlines. Prepare for exams like SBI PO, RBI Grade B, IBPS PO, IBPS Clerk, etc with Oliveboard. For more advanced exam practice, live sessions, and live practice sessions, join Oliveboard Edge.

Get Exam Ready With Oliveboard

As a part of Indian Navy’s scheme of deployment in Africa, Europe and Russia, INS Tarkash reached Maputo, Mozambique. It is there on a 3-day visit starting 25 Sep 2019.

INS Tarkash is a part of Indian Navy’s western fleet and is under command of Captain Sathish Vasudev.

This deployment is a part of mission building ‘Bridges of Friendship’ that helps in strengthening Foreign ties.

It was flagged off from Chennai Port by our Defence Minister Mr. Rajnath Singh.

Varaha is taken from ancient Purans which means the principle of Sacrifice and rescue at sea.

Malabar 2019 commences off the Coast of Japan

Indian, The US and Japan commences the Malabar 2019 maritime exercise 2019 off the coast of Japan.

Two frontline indigenously designed and built Indian naval ships, the Multipurpose Guided Missile Frigate Sahyadri and ASW Corvette Kiltan have been dispatched for the exercises, along with a P8I long-range maritime patrol aircraft.

Army Chief General Bipin Rawat will be taking over as the new Chairman of Chief of Staff Committee.

He will be succeeding Air Chief Marshal B.S. Dhanoa who is retiring from his service by the end of this month.

The Chief of Staff Committee is comprised of chiefs fo Army, Air Force and Navy, and the seniormost member is appointed as its Chief.

The Chief of COSC is tasked with maintaining the synergy between the 3 forces and evolve a common strategy to deal with external threats.

The Indo-China financial talks happened in New Delhi on 25th Sep 2019 to strengthen the financial relationship between the 2 Countries.

The discussions included bilateral trade and Investment. The agenda also included cooperation in the Financial Sectors.

The next round of the event will be held in China.

This all from us in our blog, Top 5 daily news- 27 Sep 2019. For more such updates and exam related information, stay tuned to Oliveboard.