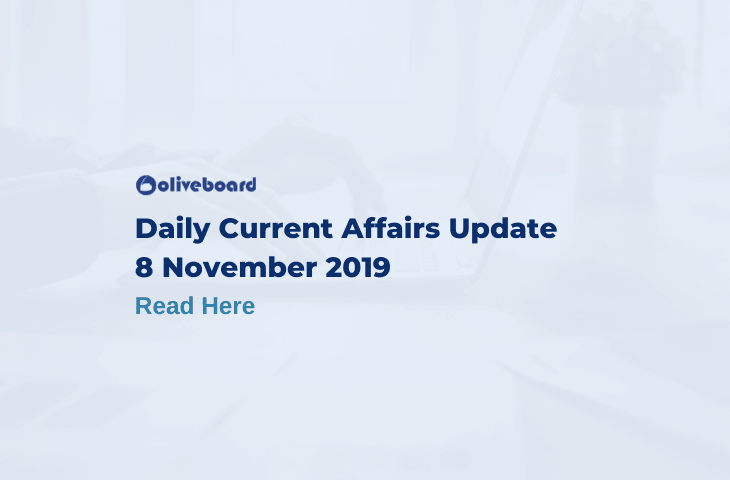 And we are back with Daily Current Affairs Update – 8 Nov 2019, covering the major headlines of the day. We bring this daily blog to help you stay updated with the latest happenings. We make sure that you do not miss out on the important news for the day. These updates will be beneficial in enhancing your daily knowings and expanding knowledge base.  If you are preparing for various exams like  RBI Grade B, IBPS PO, IBPS Clerk, SSC CPO, LIC Assistant, etc. Join Oliveboard and get the courses designed with the latest patterns and high-end mock tests to check your preparation level.

The Railway Police on Thursday issued a seven-page advisory advising personnel on security preparedness ahead of much-awaited Ayodhya Verdict from Supreme Court.

The government has cleared the Supreme Court Collegium’s recommendation to appoint Justice A.A. Kureshi as the Chief Justice of Tripura High Court.

The Punjab State Legislature (Prevention of Disqualification) Amendment Bill 2019, was presented in the house by Punjab Minister Brahm Mohindra.

St. Gregorios Orthodox Cathedral, is entering its golden jubilee year. It is perhaps one of the first orthodox churches established outside Kerala.

Iran is hit with an earthquake of magnitude 5.9 which claimed 5 lives and left 120 injured. It hit Iran’s Eastern Azerbaijan province.

Former New York mayor, Michael Bloomberg, has shown interest in running for the presidential election in 2020.

The international community does have a role in diffusing the tension in Kashmir. India- Pakistan dialogue could help arrive at a certain solution.

China, US Agree to roll back tariffs as part of trade deal

China and United States have agreed to roll back tariffs on each others’ goods part as the first phase of the trade deal.

One of the longest-serving administrator of Mohun Bagan, Anjan Mitra, who was the club’s secretary for more than 2 decades passed away.

Parupalli Kashyap and B. Sai Praneeth also bowed out of the tournament.

That is all from us in this blog Daily Current Affairs Update – 8 Nov 2019, we have tried to cover the major headlines for the day and its essence to help you get a good read. For more such updates, please stay tuned to Oliveboard.