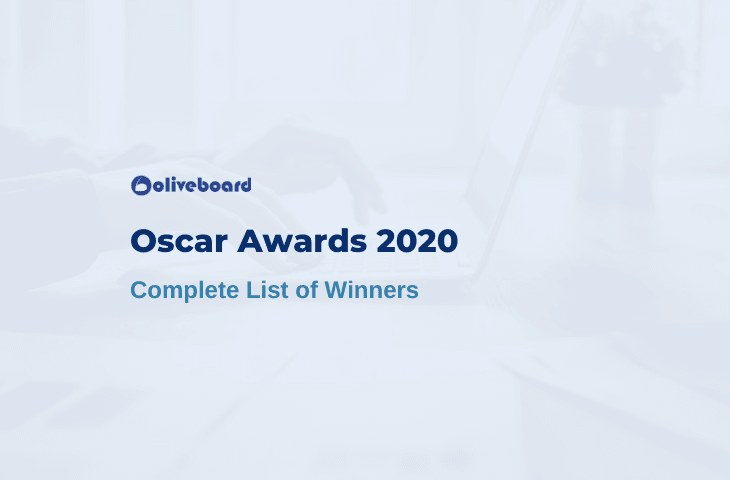 The 92nd Academy Award winners are announced and here is the complete Oscar Winners List 2020. Stars of Hollywood came dressed their best as they honoured a 3 hour-long event held on February 9, 2020, in the Dolby Theatre at the Hollywood and Highland Center in Los Angeles to celebrate excellence in filmmaking.

All eyes were on the coveted best picture prize, which awards watchers believed was a three-way race between independent social satire “Parasite,” British director Sam Mendes’ immersive World War One movie “1917” from Universal Pictures CMSCA.O, and Quentin Tarantino’s love letter to show business, “Once Upon a Time in Hollywood,” from Sony Pictures

The Academy Awards, popularly known as the Oscars, are awards for artistic and technical merit in the film industry. Given annually by the Academy of Motion Picture Arts and Sciences (AMPAS), the awards are an international recognition of excellence in cinematic achievements as assessed by the Academy’s voting membership. The various category winners are awarded a copy of a golden statuette, officially called the “Academy Award of Merit”, more commonly referred to by its nickname, the “Oscar”. The statuette depicts a knight rendered in the Art Deco style.

Let us jump on to the list of winners.

Renée Zellweger has won the best actress Oscar for her role as Judy Garland in the biopic of the singer and movie star.

6. Best Actress in a supporting role

7. Best Actor in a supporting role

Brad Pitt for Once Upon a Time in Hollywood, a 2019 comedy-drama film written and directed by Quentin Tarantino

Learning to Skateboard in a Warzone (If You’re a Girl) – a 2019 British documentary short film directed by Carol Dysinger.

The Neighbors’ Window – a 2019 American short film written and directed by Marshall Curry.

Once Upon a Time in Hollywood, a 2019 comedy-drama film written and directed by Quentin Tarantino.

That was the complete Oscars Winners List for 2020. Our advice to all the aspirants would be to by heart the names of all the Oscar Award winners for your Bank and Government Exams preparation. Keep visiting this space for more Free Study Materials, Free Quizzes etc for Exam preparation.

Take up a Free Mock Test for the exam that you are targetting and understand the level of your preparation. See where you stand when compared to your peers.

Unlimited Access: Exam Courses, Any Time at your Fingertips

Now don’t wait for any exam notification to come. Start preparing for it whenever you want.

Once you subscribe to Edge 2020, you’ll get access to all the courses* available at the platform. Choose any course, any time, whenever you like. Just Do it Your Way!

Subscribe Now and Get 50% Off on Oliveboard EDGE 2020 Subscription