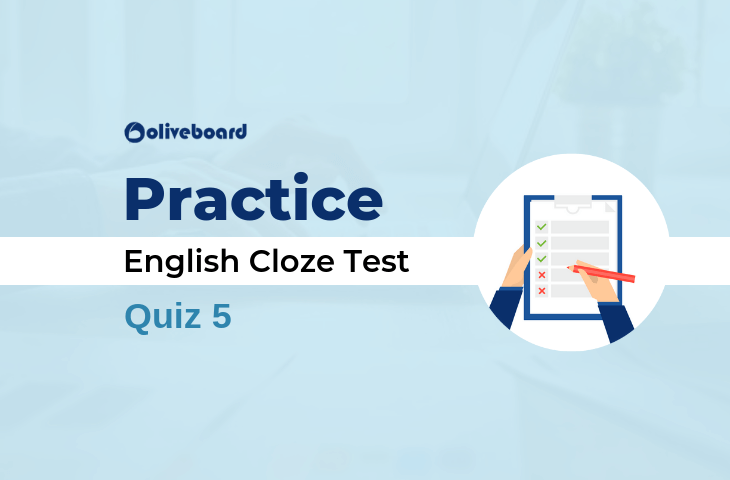 While preparing for any Bank, Insurance or Government Exams one of the biggest challenges the aspirants face is preparing for the  Cloze Test. Cloze Test is one of the recurring topics under the English Language section of various competitive exams. It tests a candidates understanding of the passage, grammatical skills and vocabulary, and like RC, it is one of the most scoring topics under the English Language section.To ace the Cloze Test questions you will have to practice and solve them regularly. Keep this point in mind, we are starting a new series –Practice Cloze Test. In this series, we are going to provide you with Free Cloze Test Questions regularly. So, let’s begin with English Cloze Test 05.

Directions for Questions 1 to 10: In the following passage there are blanks, each of which has been numbered. These numbers are printed below the passage and against each, five words are suggested, one of which fits the blank appropriately. Find out the appropriate word in each case.

Hundreds of plants and animals are (A) every day due to deforestation and urbanization what might happen if this continues in the future? The last mass extinction of plant and

animal species occurred 65 million years ago with the Dinosaurs. In all, five mass extinctions have occurred and scientists (B) earth is in sixth mass extinction. The world as it is now is threatened, including people, who are responsible for earth’s (C). Pesticides contaminating water; overharvesting of animals and plants; air pollution; illegal fishing and the Clearing of land are direct results of urbanization and deforestation. People have (D) and damaged almost half a earth’s land, at a very unsustainable rate.

Global warming is having a serious impact as well. A six-degree Celsius increase in global temperature killed 95% of all species on Earth 251 million years ago. An increase of six-degree Celsius is forecast this Century if a change is not made to (E) the damage done to earth. Humans will be one of the 95% of species lost. Noticeable, changes of global warming include migration (F) and the change in season innings. Migrating birds are migrating earlier, which in turn is causing them to hatch eggs and (G) young earlier than they did at the beginning of this Century. While this is just the tip of the iceberg many other (H) regarding the extinction of plant and animal species need addressing. It is more important now than ever before to pull our heads out of the sand arid make changes for the (I) of the earth. Future generations are (J), as they are a species as well.

That’s all from us. Hope you liked the English Cloze Test 05 from our series of Practice Cloze Test. To practice more questions for LIC ADO 2019 exam, keep visiting Oliveboard’s Daily Updates.

If you wish to get in touch with your fellow competitors for preparation of Bank & Govt. Exams, you can visit Oliveboard’s discuss forum.
All the best!