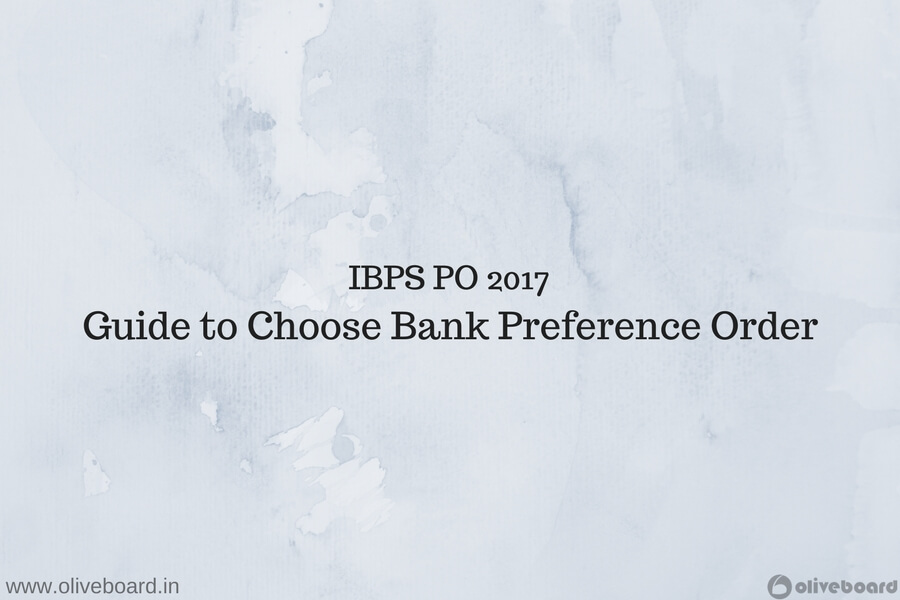 We have been getting a lot of queries regarding how to fill the bank preference for IBPS PO 2017 examination. In the following article, we will brief you on the parameters you can consider before preparing your final preference list.

The preference list is to be chosen in decreasing order of priority. The banks you mention at top of the list are considered as top priority and the banks at the bottom are least priority.

Here’s a list of participating banks and their respective vacancies across categories for your reference:

To start with, first make a list of what you want from the bank you want to work in. For instance, you might want to get posted in your home town, or somewhere nearby and work in a bank that offers good work-life balance, etc. After that, check which bank matches your needs or at least comes close to your needs, before making your decision.

Parameters to consider to before choosing your preference for IBPS PO 2017:

The first and foremost thing you should consider is the bank’s location. If you want to work in a particular region, check out the banks that have headquarters in that region and place them higher up in your preference list.

For example, Canara bank has its headquarters in Bangalore. So, choosing Canara bank automatically increases your chances of getting posted in Bangalore or Karnataka or somewhere in Southern India.

Following is a list of the participating banks and their respective headquarters:

Following is a list of regions, and banks that are most likely to post candidates in that region:

Usually if a bank has more branches, the frequency of the candidates getting transferred is more. Therefore, if you aren’t looking for frequent transfers, choose accordingly. For those of you who are fine with frequent transfers, some banks allow you to choose the place of posting, however some don’t; some banks post you in rural as well as urban areas and some post you only in urban areas. Therefore, we suggest you go through transfer policies of banks before choosing your preference.

For those of you who don’t want to get transferred to a foreign country during your tenure, you wouldn’t want to give preference to banks that has branches overseas.

Most banks follow similar salary structure, and promotion policies and have similar responsibilities for probationary officers. However, there are slight variations in them. For instance, getting posted in rural areas could mean lesser HRA than those posted in urban areas or metros. This could impact your gross salary.

We suggest you talk to employees working in these banks and get an honest feedback before deciding your preference list. Ask them about the work culture, promotion policies, and career growth.

Suppose a bank you want to work with has not reported vacancies and you place this bank lower in your preference list. If the bank announces its vacancies before you get placed, there are chances you will get placed in a bank which you placed higher up in your preference list and not the bank you want to work with, even though you have cleared that banks cut off.

Therefore, we suggest you to not base your preference on vacancies and regret it later. Consider the location/region of the bank, work culture, transfer policies, etc.

In the end, the allotment will be based on your preference, overall marks in mains and interview. However, preference list plays a major role in your allotment too. Therefore, decide your preference order after careful consideration of the above parameters.

IBPS PO 2017: Create your own customized study planner for free