The SSC CHSL Tier 1 examination is going to be conducted from 16 March 2020 to 27 March 2020 and all the candidates who have successfully submitted the online application form are waiting for SSC CHSL Application Status and Admit Card.

The region-wise SSC CGL 2019-20 Tier 1 Application Status can be checked by clicking on the link provided below.

What all will be covered in this article?

Register here to get FREE regular updates on your mailbox Want to check the level of your preparation? Take a free mock test 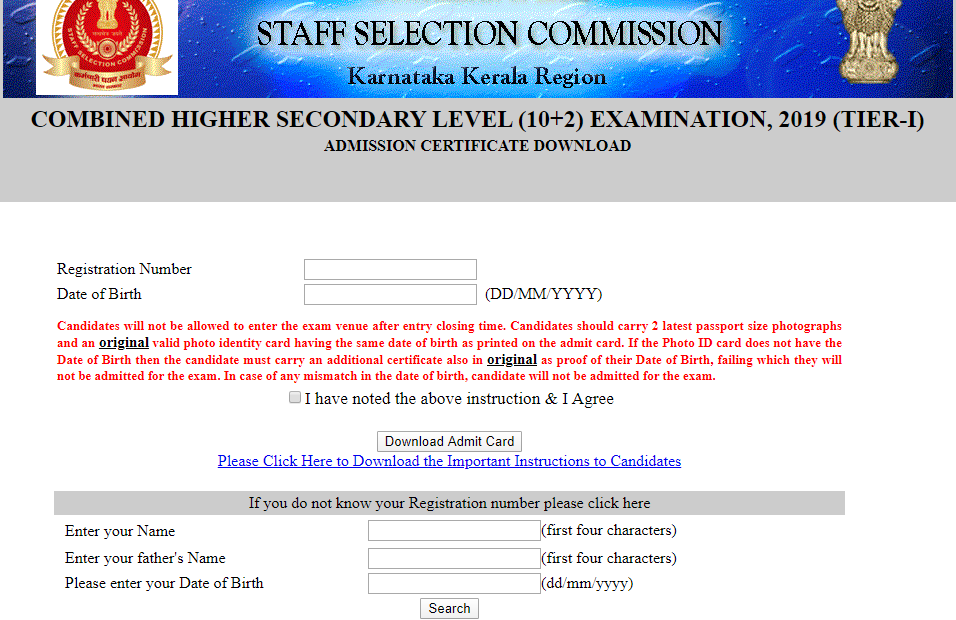 Step 5: Enter the required credentials such as Roll No., Candidates Name, Date of Birth in the login page.

Step 6: Download the Admit card and take out the printout.

Register here to get FREE exam related information  on your mailbox

5. Documents to carry along with admit card to the examination center

You can carry one of the mentioned documents to the examination centre:

1. Candidates should carry 2 latest passport size photographs and an original valid photo identity card having the same date of birth as printed on the admit card.

2. If the Photo ID card does not have the Date of Birth then the candidate must carry an additional certificate also in original as proof of their Date of Birth, failing which they will not be admitted for the exam.

3. In case of any mismatch in the date of birth, the candidate will not be admitted for the exam.

Check out some important SSC CHSL exam day instructions below:

Attempt a free mock test in the latest pattern

Step 5: Enter the required credentials such as Roll No., Candidates Name, Date of Birth in the login page.

Step 6: Click on the Search Status. Information regarding the examination date and the city would be mentioned.

Check your all India standing with a free mock test

Answer: Yes, SSC CHSL 2019-20 Tier 1 is bilingual. You can attempt the questions both in Hindi and English.

Q3) How can I download the SSC CHSL admit card?

Answer: You can download the SSC CHSL 2019-20 admit card by clicking on the regional links provided above.

This was all from us in this blog of “SSC CHSL Admit Card 2019 – Tier 1”. We hope that the information given here benefits you and helps you in more than one way.